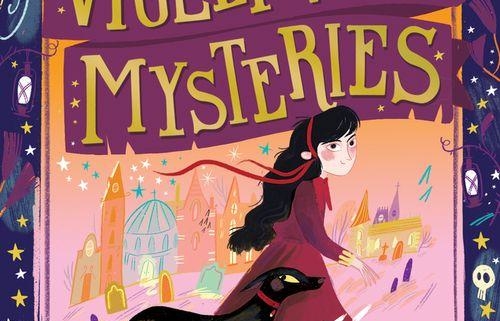 The Violet Veil
Mysteries began on a dark and stormy night… I know, we’ve all heard that
one before. But in this case, it was about a decade ago, and I was lying in bed
trying to think of ideas for new stories. For some reason, the name The Undertaker’s Daughter came to my
mind (this was the working title of the first book, published as A Case of Grave Danger). I wondered what
sort of adventure might befall the daughter of a Victorian undertaker, and I
imagined another dark and stormy night: but in this case with a spooky
cemetery, and a boy who wasn’t as dead as he seemed…

Now, I’d always wanted to write a graveyard story. As a kid,
I often played in graveyards, and found them to be fascinating and almost magical
places. I was enchanted by their history and even wrote my A Level coursework
on The Language Of Gravestones. When I first read The Graveyard Book by Neil Gaiman, I thought he had written the
perfect graveyard story – and although I never thought I could compete, I at
least now had an idea that I knew I could work into the project of my dreams.
In my hometown of Bath, I often passed an undertakers that sits beside a
Victorian cemetery, and this was the inspiration for Violet’s home. That gave
me a setting for the mystery to take place in.

My mystery writing days began at Bath Spa University, where
I was studying Creative Writing (and later went on to do the MA in Writing For
Young People). For many years I had only seen myself as a fantasy writer –
inspired (perhaps a bit too much) by my favourite authors. But one day we were
asked to do a writing exercise where we imagined a character going into a room
that they hadn’t set foot in for a long time, and for some reason I immediately
pictured a room with twin beds in it, but only saw one girl entering. By the
end of the lesson I had written a chapter about a lost twin and a secret diary,
and I knew this was a mystery I wanted to solve.

So the first of my Scarlet
and Ivy series was written because I felt deeply curious about what could
have really happened to Scarlet after her disappearance at Rookwood School. I
hoped that readers would feel the same way! I began to fall in love with
writing mysteries. I felt as though I had discovered my own voice, and a way of
writing that was exciting and gripping for me.

Violet had a mystery that I wanted to solve, a puzzle
surrounding the boy Oliver and who tried to murder him. When I thought of the
book as The Undertaker’s Daughter, I
knew it was not right for her to be defined by her father, and I quickly
realised that Violet thought that too. She wanted to prove herself and be
defined on her own terms. That gave me a driving force behind the plot, as
Violet almost dragged me along behind her with her determination to show the
world what she was capable of. She wasn’t afraid of a bit of mayhem, or of
stepping outside of the box that Victorian society tried to put her in.

It only occurred to me years later, after a suggestion from
my editor, that Violet ought to have a touch of magic as well. As someone who
had always loved fantasy, it felt nice to come full circle and really add
something supernatural back into my story. Violet lives on the edge of life and
death – whether this is literally living beside a cemetery or having been born
in the mortuary – and this has given her the power to sense ghosts. There is
also something a little bit magical about her pet greyhound, Bones…

Violet is by no means unafraid – but her bravery and joy and
determination keep her going. I hope that all my readers can take a little of
this from Violet, to help us face the dark and stormy nights of our own.

Welcome to the imagination-where myths, magic and mayhem collide
Scroll to top