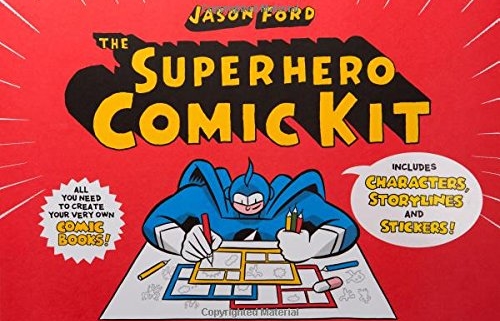 FCBG were delighted to put some questions to illustrator Jason Ford, author of The Superhero Comic Kit and the judge for our KS1 competition entries for National Non-Fiction November 2021.

Tell us about The Superhero Comic Kit and what inspired it?

The Superhero Comic Kit (SKC) is a ‘do-it-yourself’ comic-making book. It comes with sets of pages that include a cover, a story and panels, which once assembled, allow you to create 8 different comics. There are supervillain characters to copy and draw that can be used to populate the stories along with superheroes that you get to design yourself. Just to add to the mix, the kit comes with a set of colourful stickers of Crash!, Bang!, Pow! sound effects.

It was inspired by my own childhood where reading comics was a popular activity that was followed by my own attempts at making a comic. I enjoyed doing the covers but always found bringing the storyline to a satisfactory conclusion the tricky bit. That’s why the SKC comes with ready to go storylines so the kids can concentrate on filling the panels with their wonderful drawings. I wish I had the SKC when I was a kid!

How old were you when you first started illustrating?

I was always drawing as a kid and meddled with the idea of wanting to be a cartoonist during my teens. This was followed by a stint at art school trying to hone my illustrative skills. But illustrating as a viable activity didn’t start until I was probably 22, when I was filled with naive enthusiasm, grim determination and fear. A heady mix. It probably took about 18 months before I felt I was getting a reasonably steady flow of work to consider myself as an employable illustrator.

Which superhero comics were your favourites as a child?

I cut my childhood teeth on Marvel comics who were home to the likes of Spiderman, The Fantastic Four and Captain America. There was one particular artist by the name of Jack Kirby who brought these characters to life with such dynamic graphic skill that made reading their escapades such a joy.

Do you have a favourite superhero?

My favourites were the Silver Surfer (not the internet loving pensioner variety), who was a shiny looking character that glided around the universe on a surfboard, and Daredevil, who was a blind superhero but still managed amazing feats of daring do. The Hulk, whose constant refrain was ‘Hulk Smash!’, came a close third.

What do you think makes a good superhero?

Ideally someone who has an inherent sense of justice, loyalty and staying true to one’s self. Although, having one or two flaws is perfectly acceptable.

Superheroes are sort of human after all. Oh, and always having a spare clean outfit to hand.

Do you have a real life superhero?

Currently it’s Marcus Rashford, the Manchester United footballer, for his work in tackling child food poverty. He’s used his position as a high profile sports personality to affect real change for lots of children in difficult circumstances. Keep up the good work Marcus!

– The Superhero Comic Kit and Jason’s new book The Cosmic Book of Space, Aliens and Beyond are out now (Laurence King Publishing)

Heroes for Everyone
Scroll to top