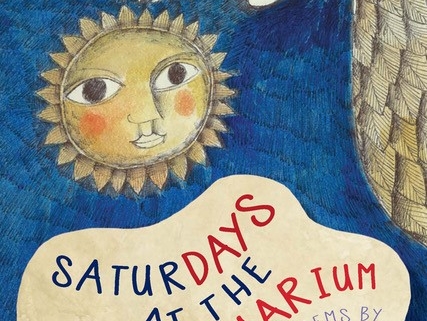 The Federation’s National
Share a Story Month theme of myths, magic and mayhem is right up my street, and
my poetry collection, Saturdays at the Imaginarium, is full of all three! The book explores and celebrates the power
of the human imagination, which has fascinated me since I was a child.

Wikipedia says
the imagination is “the ability to produce and simulate novel objects,
sensations and ideas in the mind without any immediate input of the senses.” In
other words, it makes stuff up! The poems I made up for the book are quite playful
and surreal but at the same time they consider some big questions (even
Einstein famously said that imagination is more important than knowledge).
I can’t promise answers but I hope the book will encourage some inventive
ponderings, quirky discussions and creative explorations.

A key part of what makes us human

As a kid I was often
told I had ‘too much’ imagination and I suspect that hasn’t changed much, for
better or for worse! But the imagination is a key part of what makes us human
and it plays a huge part in shaping – while also being shaped by – our sense of
self, of ‘other’ and of the world. To put it another way, the possession of an imagination
makes us all supreme storytellers whether we realise it or not. Every day we use
our imagination to weave random thoughts, feelings and experiences into highly
creative narratives that become the stories of our lives – the ‘ordinary’
myths, mayhem and magic of everyday existence.

For example, I
spent most of my childhood lugging around a story that I was hopeless at sports
and I spent years ducking out of games for fear of making a total penguin of
myself. Thankfully I eventually re-wrote the story and these days you’ll find
me happily yomping up hills, sea swimming, yoga stretching and sprinting till
I’m breathless.

I also work on a
research project at the University of Bath which looks at how, after wars and
conflicts, the stories people tell about those conflicts and about those on
‘the other side’ tend to determine whether similar conflicts will happen again
(mayhem) or if there can be a move towards peace (magic). The imagination, as
it turns out, is key to empathy. Can we imagine things from another’s
perspective? What if the stories they tell are very different from our own?
Does hearing their story help us understand their perspective, even if we
disagree with it?

One of the best
pieces of advice I’ve ever received is ‘never underestimate the importance of
the stories you tell yourself’ and Saturdays
at the Imaginarium is partly inspired by that advice.

A mix of real-life and fictional characters

Many of the
characters in the poems are based on people I know (shshsh, don’t tell them) or
on stories I’ve read. There’s Murray, the mountaineer who’s terrified of
heights but doesn’t let his fear stop him conquering peak after peak. There’s
Goldilocks’ little sister who feels dwarfed by her sibling’s fame and needs a
success story of her own. And there’s a kid who feels like “a hamburger child
in a fish finger family” (that tricky push-pull between individuality and
belonging which most of us never grow out of!).

There are poems
that explore questions about imaginative influence, like how do adverts use
stories to make us want to buy things? A boy wants to save his friends from possible
danger but they’re not listening since all he has to go on is intuition not
solid evidence. A girl deals with hurt feelings by imagining she’s a witch
casting revenge spells. In the poem below, a person sees trouble everywhere but
then realises that the problem may be in their own eyes. You can also watch an
animated film of the poem at www.youtube.com/watch?v=jIMl0LcPYkU&t=75s. 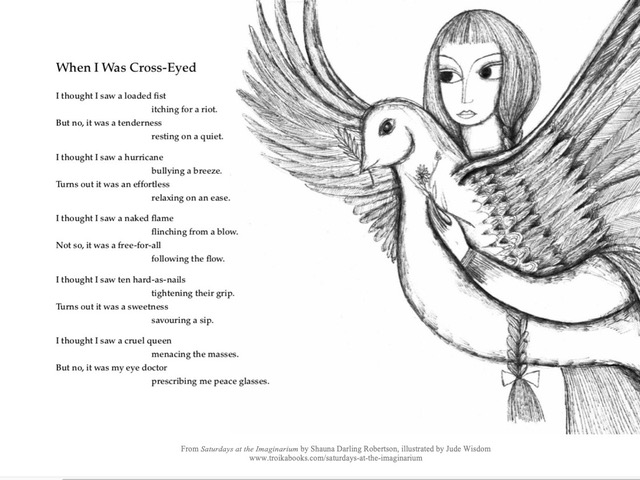 Other poems turn
the world on its head in various ways, suggesting fresh perspectives… birds can’t
fly but thoughts can; inanimate objects have emotions, and our body parts are
removable and can go off and do their own thing. Oh and the Imaginarium in the
title poem is a place where whatever you imagine immediately comes true, which
may sound like all your banana sundaes come at once, but think about it… magic
or mayhem?

I had a magical time working on the book with Troika’s editor
Roy Johnson and illustrator Jude Wisdom. There was a bit of mayhem too… it was
a wonderfully collaborative process and we drank lots of coffee, ate cake and laughed
a lot!

I love that
Jude’s illustrations don’t over-explain the poems. I’m not keen on artwork
that’s too obvious as it tends to ‘collapse’ a poem into one dominant line of thinking
rather than allowing for multiple interpretations. Better to leave space for
the imagination – especially in a book about the imagination! (Do look out
for Jude’s brand new picture book The
Island, it’s a beautifully quirky story about
migration and belonging.)

Discover more about Saturdays at the Imaginarium at www.troikabooks.com/saturdays-at-the-imaginarium. You can also visit Shauna’s website www.shaunadarlingrobertson.com for a blog of ideas and exercises based on some of the poems, along with audio recordings and videos too.

https://www.youtube.com/watch?v=WT68jy-6BWo&t=3s
A trailer for Saturdays at the Imaginarium 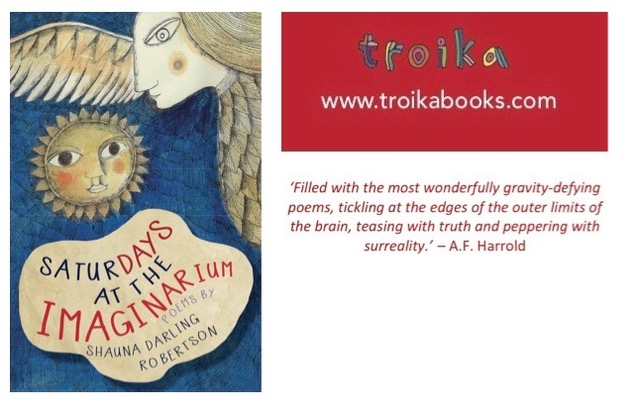