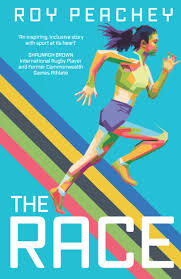 A truly thought-provoking blog from author Roy Peachey about endings and beginnings in stories.

“Why have you started with the epilogue?” my daughter asked me.

She’d picked up Cliffhangers, my latest work in progress, and was looking at it with a bemused expression.

​But endings can be spoilt in more than one way. As a teacher, I am sometimes guilty of rushing through a book to finish teaching it before the end of term. As readers, we can too readily snap a book shut and reshelve it without allowing the ending, and what lies beyond the ending, to work its slow magic upon us.

All books must come to an end but novelists never want their readers to move on too quickly. A good book should create echoes that only slowly fade away. That is why the very last line of The Race, my middle-grade novel about Eric “Chariots of Fire” Liddell and a young Chinese-British sprinter called Lily, recalls an earlier piece of dialogue. The last sentence of the book leads readers back into the story.

But there’s more to the endings than the very last line. Like a good symphony, a novel should gather pace towards the end, so that the final chord, when it eventually arrives, is devastatingly powerful. That is certainly how I’d like to think of the final chapters ofBetween Darkness and Light, my novel for adults about the Chinese Labour Corps in World War I. The rich symbolism of the final page only makes sense because of what has gone before.

Another way of expressing the same idea is to say that a good ending should appear to be the only possible ending. Or, at least, the most satisfying of all the possible alternatives. To make this point, I sometimes ask my students to rewrite the last pages of a novel they know well. Take Of Mice and Men, for example. George shoots Lennie but he could have acted differently. Would it have been a more artistically (and morally) satisfying ending if he had been shot in Lennie’s place? Or if he’d fought back? Or if he’d tried to help Lennie run away? By re-writing the ending, these tricky questions are brought out into the open.

Of course, there are many ways of creating a good ending. Some authors pull the twists and turns of the plot into a deeply satisfying resolution – as Tolkien does in The Hobbit, for example – while others let us down gently as we prepare to re-enter what we fondly think of as the real world. The strangely bathetic ending of The Wind in the Willows is a good example of this approach.

Which brings me back to the question my daughter asked at the beginning. The question I still haven’t answered because I’ve made you wait to the end. Why did I start with the epilogue when writing my latest children’s novel?

The truthful answer is that, though I knew exactly where the plot was heading, I didn’t know how my characters would get there. Starting at the end therefore seemed to makepractical sense. However, to my delight, starting at the end also helped me to begin. With the resolution safely in the bag, I saw how I could create a literal and metaphorical cliffhanger in my opening chapter. What’s happens is…

​But I’d better not tell you. Not yet at least. The beginning, like the end, must remain a mystery for now.