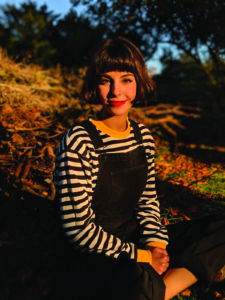 I’ve moved around a lot in my life. The first time was when I was about a year old, from where I was born in Bahrain to Kuwait. From then on, I moved countries, houses and schools throughout my childhood. With my family at first and then, when my family split in half, on my own to visit or live with either parent.

In A Flash of Fireflies, I wanted Hazel’s experience of moving on her own, before her parents joined her, to echo my own solo flights which were both exciting and scary.

Like me, Hazel is from a mixed heritage background—though in her case that’s Kuwaiti-English (I am Kuwaiti-Canadian)—and so her experience of belonging differs from her parents as they grew up in their respective cultures. Her father chose, himself, to leave England, but he grew up knowing he belonged to a place. Her mother moves from Kuwait to England for the first time during the course of the book, but again with a firm sense of identity. For Hazel, she straddles two worlds. England is unfamiliar to her, so—even though she is half-English—how can she feel she belongs there?

Hazel is named after her great aunt, who raised her father. When she first comes to the unfamiliarity of England, and is faced with meeting her great aunt for the first time, she doesn’t feel as if the name belongs to her. She explains this to a student she meets at summer school called Ruby. Though Hazel and Ruby have had different lives, experiences and personalities, they bond over the shared experience of being mixed heritage—the unbelonging of it.

People often like to ask me where I’m from, and I always say I don’t really know. At times it felt like I couldn’t claim either ethnic identity, so I didn’t have one. But I see it more positively now. I’m not two halves, but an abundance of wholes. And maybe belonging isn’t a place: it’s the worlds of the stories I write and the ones I read; it’s my treasured clothes, and my hobbies and favourite foods. And it’s the people and animals I love and those who love me back.

That’s what Hazel comes to realise in A Flash of Fireflies. That home isn’t necessarily a place (though she does lay down roots in that sense), but the people who make it up. In the end, her patchwork identity doesn’t feel fractured at all, but enriched in all its variety.

“Pack your bags- we’re off!” by Lu Fraser