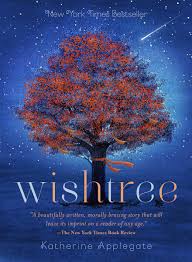 We are so pleased to share a blog from well-known author, Katherine Applegate, all about her book Wishtree.  This is newly published in the UK and it has a wonderful message in the dedication, which she explains in greater detail. 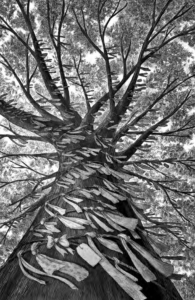 When I learned that my novel, Wishtree, was going to be published in the UK, I was overjoyed. Whenever I’m lucky enough to cross The Pond (I live in California), I head straight to London, where I spend my days luxuriating in its breathtaking collection of bookstores. To think that my little book might take its place on some of those shelves is a dream come true.

​As it happens, I had bookstores— those sanctuaries of freedom and tolerance—in mind when I wrote the dedication to Wishtree. Just five simple word, it reads as follows:

​Now, you may or may not be a newcomer to your country. But I can say one thing with absolute certainty: if you love books, you are a welcomer.

​How do I know? Because book lovers are, by definition, welcomers. Is there anything in the world more cozy than a well-stocked bookstore? More congenial than a well-staffed library? Bookstores are the the safekeepers of our stories. Of all stories. Is there anything more welcoming than a place where all tales are honored, and all visitors are invited through the door?

​Perhaps. But these days, it seems, welcomers are not always so welcome.

Wishtree examines what happens when someone carves the word “LEAVE” into a beloved oak tree, clearly targeting the Muslim family that lives nearby. The story is told by a most unusual narrator: Red, a majestic oak tree. A neighborly fixture in an immigrant neighborhood, Red has stood witness for over two hundred years to the best and worst of human behavior. “I love people dearly,” Red says. “And yet. Two-hundred and sixteen rings, and I still haven’t figured them out.”

​Hate crimes are nothing new, sadly. But they’re on the rise around the world. In writing Wishtree, I wanted to talk about this in a simple and accessible way, one where even the youngest reader would be prompted to ask that most heartbreaking of questions: Why are those people being treated unkindly?

​No talk of politics. Just the stripped-down essence of it all.

​I knew it had to be Red who told this tale. I wanted an outsider’s look at human behavior, not unlike the way Ivan the gorilla, in my novel The One and Only Ivan, worked to understand his world. Red provided me with just that kind of observer.

​But Red gave me something else:  hope. A narrator who’d been around a while, one who could reassure us that—big picture—it’s going to be all right. I didn’t want to sugar-coat things. But I wanted Red to comfort readers (and me) that this, too, shall pass. That there is always goodness to be found in the midst of fear, and light in the midst of darkness. I wanted Red to remind us that when we fight back against hatred, stories of hope can take root and blossom.

​And when those stories are told, it’s the welcomers of the world who will nurture and protect them.

​It’s the welcomers who will place them on bookshelves and in storefronts and into searching hands.

​It’s the welcomers who will open wide their doors and say, “Come in. You belong here with us. This is a place where stories are safe.

Wishtree by Katherine Applegate is published by Welbeck Children’s Books and is available from your favourite retailer.

Welbeck have produced a set of discussion notes to accompany Wishtree.  These can be downloaded here.