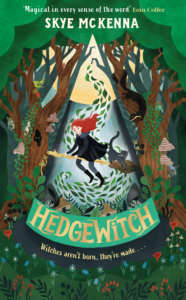 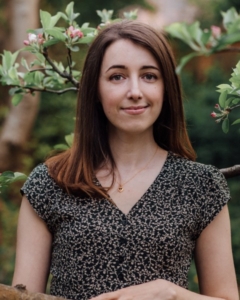 Any reader who has ever been in the Brownies, Guides or Scouts will immediately recognise the after-school training of the young witches in Hedgewitch. In this world, witchcraft is a set of practical skills – something you learn outdoors in a hands-on manner, rather than reading from textbooks in a classroom. As I began writing Cassie’s story, I saw that her excursions into the vast and dangerous forest of the Hedge would require more than just magic and that she would have to learn how to track faery footprints, light a cauldron fire outdoors and identify different magical plants and fungi in the wild.

However, it was not until I saw an old photo of a Girl Guide company from the 1910s that I made the connection. Edwardian guides wore wide-brimmed hats and carried long poles or walking sticks – essentially broomsticks! Imagining a group of them cooking around a campfire on a cauldron, I could easily see them as a circle of young witches, and so 1st Hedgely Coven was born.

I immediately set out to read all the Girl Guide fiction I could get my hands on, no easy task given that most of these books, which peaked in popularity during the first half of the 20th century, are now out of print. What I found surprised me; here were stories that, like the boarding school books with which the genre overlapped, featured strong female friendships and daring adventures, but they added something else – an awareness of class and privilege. While boarding school books largely feature middle class girls, Guides had always welcomed girls from ‘any grade of society’ and Guiding fiction explored a space in which girls from very different socio-economic backgrounds could form strong friendships and take leadership roles, where they would be judged only for their character and dedication to shared ideals.

I’m afraid we have a rather tame view of Guiding these days, associating it with domestic tasks, daily good deeds and bake sales. However, the Girl Guides have a remarkable history. In the first decade of the 20th century, when the Scouting movement took off, girls went to all sorts of lengths to participate; applying with fake names and setting up their own secret companies. At the Crystal Palace Boy Scout Rally in 1909, girls showed up in boy scout uniform and insisted that they wanted to ‘do the same things as the boys.’ It was recognised that girls could not be excluded any longer and a new organisation was set up for them, one that would include more acceptably ‘feminine’ activities alongside the outdoor adventures that had drawn them to Scouting in the first place. Yet beneath the veneer of respectability, Guiding gave girls more freedom than gender stereotypes had previously permitted; they could enjoy camping, swimming, rambling, natural history, cycling and outdoor games. During WWI and WWII, guides trained in first aid skills and acted as messengers, making a vital contribution to the war effort and showing just what girls were capable of.

Although the young witches in Hedgewitch earn badges for potion brewing, broomstick flying and rune reading, it was important to me that not just the structure, but the spirit of Girl Guiding was reflected in their coven. Therefore, it is not only girls from old witching families who can join and learn magic – any girl can take part – and resourcefulness, courage and kindness are considered the traits that make a good witch.

Inspirations behind Truth or Dare