We are pleased to share this guest blog from author Jo Simmons.  The Reluctant Vampire Queen is a book for young teens to sink their teeth into! 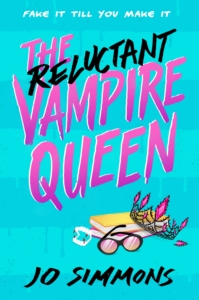 While I was working on The Reluctant Vampire Queen, I nicknamed it my ‘feminist vampire’ story. The feminism comes via its hero, fifteen-year-old Mo Merrydrew. She’s bright, principled and driven. She’s a committed vegetarian, president of the Debating Society and focussed on The Plan for her future life – great exam results, a prestigious university, a career in politics or as a human rights lawyer.

I love her for this. I admire the drive and single-mindedness of her below-the-radar long game. She’ll take being bullied by alpha female bully, Tracey Caldwell. She’ll tolerate her parents worrying about her burning out. She’ll even sacrifice her personal life – she doesn’t see her best friend Lou enough – for The Plan. It’s admirable, but it’s also a humongous, screaming flaw. The Plan is a road map of Mo’s ambition, but it’s also a doomed attempt at control. What Mo hasn’t realised, but soon will, is that there is no such thing as control. Our best laid plans rarely, in fact, go to plan. (I think some Scottish dude wrote a poem about that once…)

Enter Bogdan – the vampire bit of this feminist vampire tale – because there’s no better way to disrupt an earnest teenager’s sense of self and surety than with a six-hundred-year-old creature of the night in a dodgy suit. He appears one damp October evening and tells Mo she’s the Chosen One, destined to rule the vampires of Great Britain. Talk about curve balls. This wasn’t in The Plan, and yet, Mo realises, it does tick a few boxes – young female in a leadership role, eternal life (can get so much done!), cool gothy wardrobe and no more PE.

On top of that, there’s the intoxicating experience of being Chosen – what teenager, struggling to work out who they are, hasn’t dreamed of being singled out as unique? When I was Mo’s age, desperate to fit in at my rural comprehensive but also get my homework done, being plucked out of obscurity was a powerful fantasy. So it proves for Mo. She finds herself tempted, but then remembers the blood drinking that’s very much in the vampire job spec (impossible for a vegetarian, surely?), and as for being ‘chosen’… Well, it’s just so undemocratic.

Authors have to test their characters, expose them to new and increasingly stressful experiences, but catapulting Mo into the vampire world with its ever-present threats of violence is just one of her challenges. She also has to cope with Luca, Bogdan’s familiar. Handsome and kind, he provokes feelings in her when previously there were only facts. Forget GCSEs, now Mo’s grappling with death and love. It all makes revising for her science test look like touching up your eyeliner as the Titanic goes down. For Mo, it’s time to buckle up. Life has arrived in all its messy, scary glory, and it’s going to be a wild ride.

The Reluctant Vampire Queen is written by Jo Simmons and is published by Hot Key Books.  Available from your favourite bookseller.

No Sleep for Bear by Duncan Beedie
Scroll to top