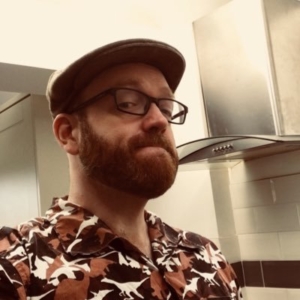 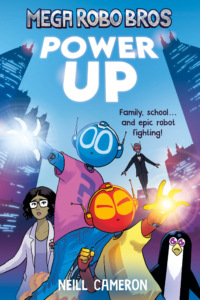 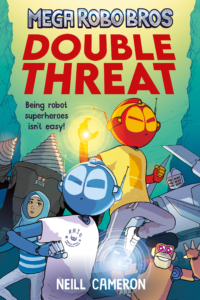 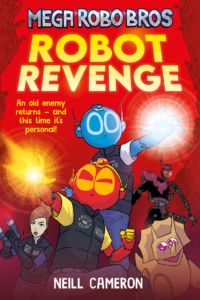 Mega Robo Bros is a story all about belonging. Or, I suppose, about feeling like you don’t belong. Alex and Freddy are robots – super-powered, sentient robots, the only ones of their kind in the whole world. They can fly, and shoot lasers, and perform all kinds of amazing feats of super-powered heroism. But they’re also just regular kids, who have to go to school every day and do maths and P.E. and queue for lunch, the whole deal.

Because they’re the only robots in a whole school full of humans they can’t help but stand out, and they have very different ways of trying to deal with this. Alex is the older sibling; quiet, thoughtful and sensitive. Alex’s dream would be just to blend in, to fade into the background, to be basically invisible at school. But it’s hard to be invisible when you’re bright blue, made of metal and, again, A ROBOT.

Freddy is the little brother, and he takes the opposite approach: Freddy basically figures: if everyone is going to be looking at me anyway, I might as well put on a show, and blow everything up with lasers, and basically have as much fun as possible along the way.

Alex is a question mark, unsure of everything from their relationship to gender to their very existential status; whether they even count as a person.

Freddy is an exclamation point. Freddy knows exactly who he is. He’s Freddy! And he is AWESOME.

We’re not all brightly-coloured robots with amazing superpowers. But I’m pretty sure a lot of us can relate to that feeling of not quite fitting in, for whatever reason. Of feeling self-conscious, not sure of our place in the world. Of trying to figure this stuff out, to work out who we are and what kind of person we’re going to be. How scary that process can be, but also how wonderful on those beautiful days when things click and you start to find the places and the people you do fit in with.

And that’s really what Mega Robo Bros is about; a couple of kids attempting to navigate that process, in very different ways, bouncing off against each other and driving each other up the wall, but always having each other’s backs. Always, at the end of the day, together. Bound together, by the things that bind us all together.

Q&A with Caryl Lewis about Seed