Welcome back Bear! This blog from author-illustrator Duncan Beedie gives some insight into revisiting a character! It’s a great blog and a super book. 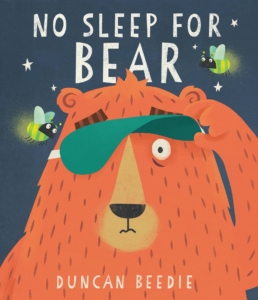 ‘No Sleep For Bear’:

Back in February 2016, my debut picture book was launched by Templar Publishing. My story about a socially awkward bright orange bear must have struck a chord with a few readers as it was shortlisted for the Waterstones Children’s Book Prize the following year. The title has been translated into multiple languages and seems to be particularly popular in Turkey, where Bear has been rechristened ‘Monti’.

Needless to say, Bear is a character who is very close to my heart and, naturally, I have been meaning to revisit him for quite some time. In fact, Templar have been very keen for me to revisit the story for the last six years, but I happened to get waylaid by a hirsute lumberjack, a ravenous pigeon, a moonstruck moth, and a band of vocally-challenged cavemen.

However, for whatever reason, in 2021 I finally found the time and inclination to give Bear a second outing and I sat at my keyboard and rattled out . . . a load of absolute guff . . . several loads of absolute guff, in fact. Perhaps I’m being my own harshest critic here. My editor didn’t use that particular term, but it was clear that revisiting the character that launched my career as a children’s author wasn’t going to come as naturally as I had hoped.

I won’t go into the details of the various drafts and dead ends,  but I couldn’t quite find the right path for my ursine protagonist.

I put it down to the fact that I first came to be a children’s author when my daughter was very young. I read to her every night from various picture books, and this led me to want to write and illustrate my own. As my daughter got older, so too did her literary tastes. Likewise, I’ve noticed a development in my picture book texts over the years that tends to follow this trend. I had gone from writing about a bear who looks at things, to writing  about prehistoric children forming a vocabulary based on their exploits. Now, I’m particularly proud of ‘Oof Makes An Ouch!’, but I think it’s fair to say that I had abandoned the simplicity of my inaugural book.

So I decided to strip things back and reimagine what life was like when I came up with the story of ‘The Bear Who Stared’. One detail sprung to mind about life back then – sleep deprivation: something to which all parents of young children can relate. It’s no coincidence that the denial of sleep is a tried and tested interrogation technique. It really sucks. But the idea of a bear settling down for a nice, long hibernation only to be struck with a bout of insomnia tickled me. And so, ‘No Sleep For Bear’ was born.

As with my writing, I had also noticed that my illustration style had become more detailed over the last six years, so it was rewarding to pare things down visually when revisiting Bear’s world: a simplified palette and minimalist, wonky-shaped backgrounds – just like old times!

Additionally, it was fun to repurpose the cover to show Bear’s new predicament whilst sticking to the stark simplicity of the original. There might be a third Bear book in the works, so I am keen for these stories to relate to one another visually, both inside and out.

Overall, I am so glad that I was finally able to bring Bear back to readers with a story that I am certain fans of the original will enjoy. It’s been an intrepid journey which my stalwart editor and designer (Alison Ritchie and Genevieve Webster) have helped me navigate. As I write this, I haven’t yet proffered my idea for the third Bear book, but a first draft is in existence – buried away in the shadows of a convoluted folder structure on my computer, reminiscent of the closing shot of ‘Raiders Of The Lost Ark’. I am confident it will see the light of day, maybe not in its current form . . . but one day.

No Sleep for Bear is published by Templar Books and is available from your favourite bookseller.

How vampires give a teen coming-of-age tale added bite

Inspiring all kids to love STEM
Scroll to top