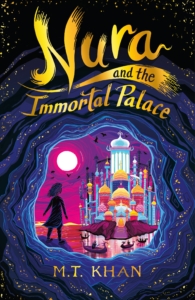 Imagine mining mica in narrow, shadowy tunnels at claustrophobic temperatures and with no safety equipment. Then imagine finding a portal at the end of it, leading you into an enchanting realm of pink seas and purple skies – the realm of jinn, full of the trickster beings from your mother’s cautionary tales. This is the crux of my debut contemporary fantasy, Nura and the Immortal Palace. It follows Nura, a spunky 12-year-old mica miner who must labour away to help put food on the table for her family. But when the mines collapse and her best friend is ruled dead, Nura digs deeper to find a portal realm of jinn – and that her friend isn’t dead, he’s been kidnapped.

The inspiration for this story hit me at an unexpected moment. I came across a documentary detailing mica mining, and when I learned the majority of workers were children, used to traverse narrow mines, I wondered why no one else around me knew of this atrocity. Why weren’t more people talking about this? How come our supply chains are so opaque that we can rarely trace the origin of materials back to their illegal sources? It was shocking – not just because these workers were being paid dirt, but because of how invisible their efforts were to the rest of the world.

After learning about mica mining and the horrors of it, I knew I wanted to write from the viewpoint of one of the child miners, and how she might have a distorted view of childhood and the future. These are heavy themes, but I discussed it against a backdrop of a glittering world and a fast-paced adventure. So often we see foreigners and adults detailing the situation; the kids only seen as victims and rarely given a voice. I wanted to change that. These kids, no matter how forsaken or discarded they are, deserved to be the protagonists of their own lives.

And it wasn’t just their situation that spoke to me, it was their skin, their language, who they were. These South Asian kids looked like me and talked like I did. As an immigrant, I spent much of my life trying to suffocate my heritage to suit western customs. But now that I’m older, I’ve recognized the views I had of my own culture were misjudgements created by harmful media depictions. Writing Nura and the Immortal Palace has been my way of reaching back to my culture. It’s a celebration of everything I love about it – the food, the clothes, the community.One of my biggest hopes with Nura and the Immortal Palace is for readers to see the normality of Islam – it’s not the extreme dogma that media likes to portray it as. It can just be kids making time to pray, getting excited about Eid, or trembling at a late-night jinn anecdote.

Nura and the Immortal Palace was written for 12-year-old-me, someone who would’ve devoured a book about an ambitious girl who looks and thinks like her. But it’s also written for people of any age to enjoy an enchanting journey into an extraordinary world – and for those who think they’re too disadvantaged to be heroes. You can be. Because everyone deserves a chance at their dreams.

Nura and the Immortal Palace is written by M.T. Khan and is published by Walker Books.  It is currently Waterstones Book of the Month!

Walker Books have produced the following guides to accompany the text for use in schools and at home.