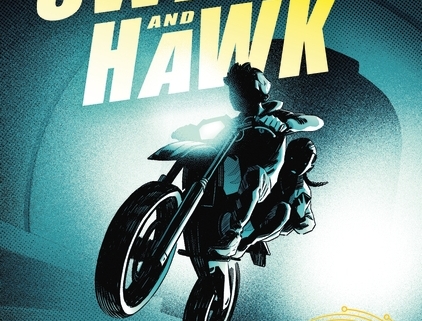 We have a brilliant blog post from Logan Macx- co-authors of Swift and Hawk, a fast paced tale of spies and crime! 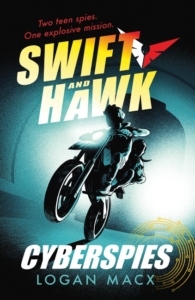 We met because our wives were childhood best friends from way back when they were seven years old in Yorkshire. We have also both been writing adult fiction for many years. So, needless to say, we both love books and we always discussed writing and novels and the world of fiction whenever we got together – which was often because of our wives’ friendship.

When our children came along, we began to read all kinds of children’s books to them and so we re-entered that magical, exciting, adventurous world of children’s fiction. We rediscovered the power, enchantment and sheer excitement of the old classics and the work of so many brilliant new children’s authors. (There’s so much fantastic children’s fiction out there.) Soon enough, our children began to ask why we only wrote for adults and why we hadn’t written anything for them…

We stalled. We had a lot of commitments and so for a while we just talked about ideas. They kept asking. Then, one day, we were on a holiday walk in a very remote part of mainland Britain – a wild, almost mystical, place called Knoydart in Scotland that you can only get to by boat. And that’s when we had the idea of the two main character’s names – Caleb and Zen. Somehow our swirling ideas became more real and tangible with the reality of these two characters. And we also knew straight away that we wanted them to go on an exciting adventure to a place like Knoydart – with eagles, mountains, mist, snow in the winter and dramatic shorelines. But we also wanted their story to be modern, contemporary and unafraid of technology. Because that was the world our children lived in – a world of AI, smartphones, apps, tablets and games. And that got us talking about how technology was really like magic for the new generation… The more our ideas took shape, the more we felt compelled to write the books! And so we began.

There’s a very exciting scene in the book where Zen and Caleb climb a mountain on the remote (imaginary) island of Spoklesoy – only to encounter the most terrifying outsized wolves at the top. Later, they realize the wolves have been implanted with strange technology and that leads them on to an even more startling discovery. This was one of the very first parts of the book and – although lots of things changed – this scene from our very first imagining never did. Indeed, that initial “feel” for the books – adrenalin-fuelled adventure married to modern technology with real characters who laugh and share a deep friendship – was formed on that walk that day in Knoydart and has remained what the books have been about ever since.

We always knew that it would be a collaboration because we were together when we began to think of Caleb and Zen – codenamed Swift and Hawk. All the imagining and story-lining and the character creation was done back and forth together – and so it just felt natural that everything would be a shared venture. A shared adventure.

Inspirations behind Truth or Dare
Scroll to top