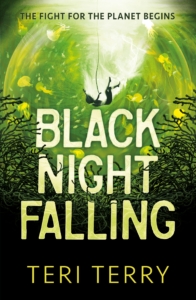 For anyone who has never read a book in The Circle series, how would you describe the trilogy to them?

They are thrillers that combine three of my obsessions: climate change, weird science, and the sea. The trilogy begins with Tabby in Dark Blue Rising. There’s something different about her, she’s been lied to all her life and is only beginning to understand who and what she is. At the same time there is a terrorist organisation that says they caused destructive storms and more will follow if governments of the world don’t address climate change. Tabby becomes increasingly convinced that they are behind what has been done to her. The first chapter can be read on my website: https://teriterry.jimdo.com/dark-blue-rising/

What is your favourite part of Black Night Falling and why?

When I wrote “the end” … ! Well, OK, that was a pretty good moment, but let me think. There are a few scenes that come to mind. One is when Denzi and Tabby are reunited; another is when Hayden meets Apple. I also loved when Hayden’s parents say they’ll help her. What these have in common is the emotional impact when one character reaches out to another.

Climate change plays a big part in the story. Why did you choose to make this a focus in the narrative?

It’s such an important issue in our lives now – I needed to write about it, at least partly to address how I felt and to read up about it as much as I could. I don’t think our governments will sort things out the way they should without everyone getting involved – not just protesters, but so many voters that governments realise addressing it is the only way to stay in power. I’d recommend reading Naomi Klein’s This Changes Everything.

When you wrote the first book in The Circle series did you have any idea on how the trilogy would end? Is the final book, Black Night Falling how you expected the series to end?

I always have an end point in mind, though the thing that often changes along the way is how the characters get there, so I didn’t have all the intricacies of the plot worked out in detail. One thing that did change is who Tabby is sitting on the beach with at the end in the epilogue (I’m being vague to avoid spoilers!).

Who is your favourite character in the book and why?

That’s like asking someone which of their children they love the most: you’d likely get a different answer on a different day! I did really love writing Hayden’s point of view – she was one of those characters who just seemed to take over and told me who she was and what she would do. I love it when that happens.