We enjoy publishing blogs where the author shares some insight into the inspiration for their books, characters or settings.  Lauren Wolk, author of My Own Lightning, her latest book, shares just this and it may just encourage you to read more of her books. 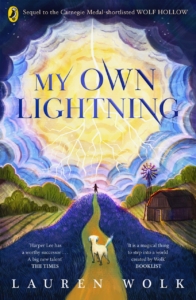 When I sat down to write My Own Lightning, I was inspired by several things. First and foremost was a desire to spend more time with Annabelle McBride, my protagonist from Wolf Hollow, and to return to her family’s farm. I wanted to be part of her life again, to discover how the events of Wolf Hollow had shaped her, and to follow her into the next chapter of her life. And mine.

I didn’t set out to send her into a lightning storm, but I did envision a “shock” of some kind. Some event that would startle her into a new awareness of herself and her world. Just as I was being shocked, again and again, by my own world at the time: by the pandemic, by political and social turmoil, by new and sometimes unsettling discoveries about people I thought I knew quite well.

I wasn’t sure what this “shock” would be, but I soon found myself giving her a literal jolt that led both Annabelle and me into new territory.

I’m always surprised and delighted when elements of my own life find their way into my stories, and in this case the “element” of lightning definitely bridged the gap between my world and hers.

Although I’ve never been struck, I’ve always been fascinated by storms and by the incredible transformations that some people experience when they survive a lightning strike. How, in rare cases, a victim may suddenly exhibit startling new abilities. A facility for complex math, for example, or for composing music.

That fascination led me to follow a recipe, in this sequel, that was a bit different from the one I followed when writing Wolf Hollow. There’s a touch of magical realism in this book, a layer of something mystical to contrast the down-to-earth reality of life on a farm during World War Two.

But all of my books rely on a marriage of what I know and what I imagine, and that’s true of My Own Lightning as well. Empathy is at the root of everything Annabelle experiences and discovers, just as it is the foundation of my own life.

A desire to understand what motivates people, to resist the hasty judgment, to see past what’s obvious: these are all critically important to me and Annabelle both.

We’re very different, she and I, but we’re also much the same. As if there’s a strong and steady current connecting us. A surge of something that closes the distance and puts us in the same time and place, the same skin, fused into one self.

I’m grateful that I was inspired to go back to a beloved character but also to write a unique story that both complements Wolf Hollow and stands on its own two feet.

Writing such a sequel wasn’t easy, but the challenge made it all the more satisfying. In this case, both Annabelle and I agree with Nietzsche: that what doesn’t kill us makes us stronger.

My Own Lightning is published by Penguin and is available from your favourite retailer.

The Girl Who Noticed Everything