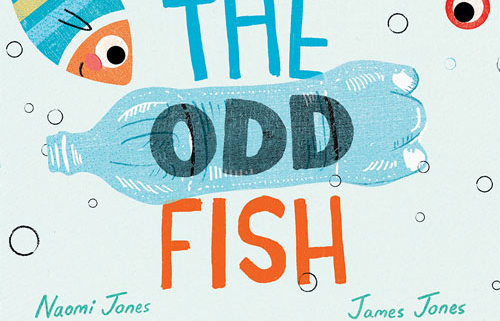 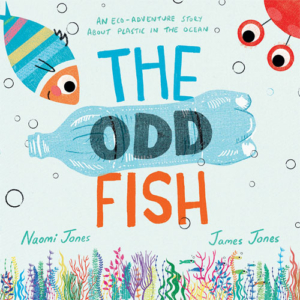 My two boys now aged 5 and 7 are a huge source of inspiration for all of my picture books. Seeing the world through their eyes as they’ve grown up has been fascinating. When my youngest son was two, we were watching Blue Planet 2 together as he loved watching all the sea creatures. However, when the episode about plastic in the ocean came on, he couldn’t tell the difference between the plastic and the fish. Of course neither can the creatures that live in our seas, which is why they get tangled up in it, eat it and sometimes die because of it.

So, I decided to write a story about a little fish who finds what she thinks is an odd, lonely sea creature but what readers will recognise is a plastic bottle. Little Fish becomes determined to reunite this Odd Fish with its family and along the way meets a seahorse, octopus and turtle who have all encountered some plastic too.

When I was little, I never thought about the plastic bottles I used or the cling film I wrapped my packed lunch sandwiches in. It just didn’t occur to me to wonder about what happened to the plastic I recycled or threw into the bin. I had no idea until recently that less than 10% of all the plastic that is put into recycling in the UK today is actually recycled. Most of it is either burnt or sent abroad to be buried in landfills.

The statistics around plastic in the ocean are terrifying. One rubbish trucks worth of plastic is dumped in the ocean every minute of every day. By 2050 the ocean will contain more plastic by weight than fish and they’ve now found tiny parts of plastic called microplastic in human blood. Since moving to Cornwall, we are more aware than ever of the impact of plastic pollution in our seas, every single time we go to the beach we find plastic washed up on the shore, from recognisable items like bottle top lids, facemasks and food wrappers to unrecognisable tiny pieces of plastic called nurdles.

James and I really hope that The Odd Fish provokes discussion between children and their parents and teachers. We would love for it to inspire readers to take action to help reduce the plastic in our oceans. We’ve included some information at the end of the book about how children can make a difference, from picking up litter, to asking their grown ups to use less single use plastic and asking their schools to take part in the Surfers Against Sewages’ Plastic Free Schools and Nurseries programme.

If everyone who reads this makes just one small change, it will add up to a big difference. James and I both hope that The Odd Fish makes people think twice about the plastic they use and where it goes when they’ve finished with it. After all, I want my children to grow up in a world where in 2050 there is still more fish than plastic in the ocean and not the other way around.

The Odd Fish by Naomi Jones and James Jones publishes with FarShore on 9 June.