We always enjoy reading about how a book, idea or character came to life and this blog post from debut author Emma Finlayson-Palmer introduces us to Autumn Moonbeam. 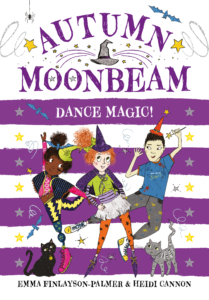 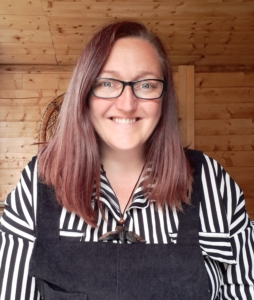 When my daughter was three, she joined a dance club. By the time she was five, she joined one of the competitive cheer teams and I had no idea how addicted I’d be to seeing the groups work together and compete.

Dance and cheer teams are often like a second family. Friendships are forged and working together as a team, helping each other is core to the ethos. My shy daughter who could barely make eye contact or speak in front of others could also get up in front of hundreds, sometimes thousands of people and perform routines as long as she was with her team.

It was this concept of overcoming your fears, teamwork and following your dreams that became the key element for Autumn Moonbeam.

Autumn Moonbeam started off as Black Cats Cheer Academy. But with some rewrites and a clearer goal it became a competitive dance team called Black Cats, who were part of Sparkledale Dance Academy. This change came about from advice from editors who felt that Black Cats Academy would conjure images of dancing felines. And that dance would make it slightly less niche than Cheer would be.

Though I’d argue that with Cheer clubs on the rise across the world, including an England cheer team, and a successful Netflix series featuring competitive cheer teams, it is certainly getting more recognition than it once did. No longer the team cheerleaders with pom poms; competitive cheer involves a mixture of gymnastics, stunts, tumbling, pyramids, and dance.

I’d always loved music and dance when I was little but had never been part of any clubs growing up. As an adult, I joined a Latin and Salsa class, and whilst I loved it, I was also a little bit clumsy and struggled to get the moves right at times, much like Autumn. I discovered a love of Zumba, which features movements inspired by various styles of Latin American dance and music.

Finding the joy and love of dance, combined with seeing how even some of the shyest and most anxious children, can lose themselves in the moment through music and teamwork truly inspired me. And I loved that children with both visible, and or invisible disabilities could be part of this magical world of dancing, and I really wanted to show that in my story. It’s not the focus of the story, it’s just part of the character’s world – that’s so important for kids to see, because they’re not just their disabilities.

Combined with my lifelong love of anything magical and witch related, Autumn Moonbeam cartwheeled into the world.

So, if you see me humming and maybe twirling or skipping along, know that I’m probably imaging I’m a witch, creating my own bit of dance magic!

UCLan Publishing have produced some wonderful activities to accompany Autumn Moonbeam.  These are available via the link below.
https://uclanpublishing.com/resources/

Autumn Moonbeam was published on 7 July and is available from your favourite bookseller.