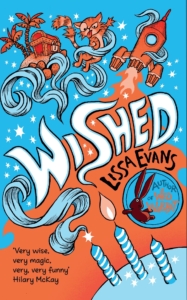 There’s a reason why all the central characters in my books for children are nine or ten years old. If you asked me how I viewed the world when I was seven, or twelve, or fifteen, I’d find it quite difficult to be specific – how could I pin down my mind-set at a particular time? But when I was nine we moved house and my memories of that year are crystalline: we went from a village to a town, from the South to the Midlands, from a huge garden to a tiny one, from a world full of friends to…none. And in my new school, my accent clanged like a bell every time I opened my mouth and no-one, no-one, had ever heard the name ‘Felicity’ before.

The consolation prize was a library, just a five-minute walk away. I installed myself there; I had probably never heard the word ‘escapism’, but the books I loved best took me away from the miserable present and gave me magical lands and gifts and wishes…

The nine and ten year olds in ‘Wished’ are Roo and Ed (a sister and brother) and Willard, who has just moved into the next street. I shouldn’t really say this, but I love Willard the most. He has coped with frequent house moves and changes of school by developing a strategy, or perhaps I should say, a role. He is – as he likes to point out at frequent intervals – the class clown, and in each new place, Willard unpacks his fake sick and his plastic spider, practises his armpit-fart noises, and walks bravely into a classroom full of strangers. He belongs nowhere, so he tries to become less of an outsider by wedging himself into a pre-existing niche.

The trouble with Willard’s strategy is that it gives a child no room to grow or change. The class clown is forever expected to make a creaky door noise whenever the teacher opens a cupboard; the class swot is the one that gets looked at, usually derisively, whenever the word ‘professor’ or ‘genius’ is mentioned. Which of these two would get cast as a donkey in the school nativity, and which would be the narrator?

In ‘Wished’, a set of magical candles spring Willard from his usual life into a situation where he doesn’t have to perform all the time. And there he finds that though he’s still very much Willard – usually saying the first thing that comes into his head, and then getting round to thinking about it afterwards – he doesn’t have to try quite so hard. Friendships can develop, he can be funny without preparing in advance and he can act out of character, because there’s so much more to him than just making fart-noises. ‘Belonging’, he discovers, isn’t a box in which to force himself, but a comfortable space where he can just be Willard.

And what was my own comfortable space, as a nine-year-old?

It was the library. And I’ve never really left…