The Last Monster is the sequel to The Light Hunters by Dan Walker.
Fans of this series will be thrilled to read Dan’s guest blog about where it all began. 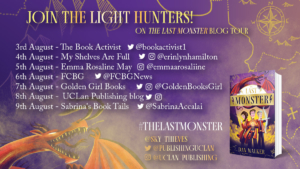 The idea for The Light Hunters, the first in the Light Hunters children’s fantasy series, came about one day when I was walking down the canal close to where I live. The life of a writer can be pretty still at times (read: hunched over a computer for hours on end, deciding whether you should use the word ‘push’ or ‘shove’ to describe a playground fight) and I always like to get out for a walk in the middle of the day to loosen up the old bones.

It was during one of these strolls, on a lovely, sunny, spring day, when I was ambling alongand I heard the sound of a snapping twig in the overgrown canal to my left. Looking across, I expected to find a squirrel or a rabbit enjoying its own lunchtime walk, but instead I was faced with three deer.

Now, perhaps it’s important at this point to mention that this canal isn’t in the middle of nowhere. It’s tucked up among a bunch of houses and a farm, so to see three deer just chilling in the middle of it was a surprise to say the least. I stared at them, and they stared at me.

Being a modern, twenty-first century author, I quickly whipped out my camera and took a snap. (I still have it to this day on my phone.) Then I went on my way. Work to do, books to write…

But I remember thinking, as I carried on walking, wouldn’t it be amazing if instead of deer in the canal, they’d been monsters instead? Huge, lumbering, slavering creatures, with sharp claws and razor teeth, ready to swallow me down with a side of grass.

It was this idea – monsters roaming the land, attacking towns and cities – that formed the heart of the first Light Hunters book, in which Lux Dowd, the main character, has to use his special Light powers to try and stop the Monsters from attacking his home.

In the months that followed the release of that story, I visited lots of schools, telling children about the book, how I came up with the idea, and how terrible its Monsters are. But all the while I was asking myself a question: why were the Monsters terrible?

And so, when it came to writing the second book in the Light Hunters series, I really got to thinking about this question. Why were the Monsters doing what they were doing? Why were they attacking and killing people? It’s fair to say the answers weren’t what I was expecting. They rarely are in life, I find.

I won’t say too much more as I don’t want to give it away. But ever since writing that story, I’ve been a little more thoughtful about biting someone’s head off when they do something bad to me.

You never know, they might need a little help themselves.

The Light Hunters and The Last Monster by Dan Walker is published by UCLan Publishing and both are available now.