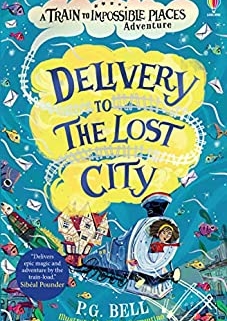 Parents tend to get a raw deal in children’s literature. At best, they’re hapless stick-in-the-muds who lack the ambition and imagination of our young heroes, and are quickly outgrown. More typically, they’re dead and buried long before the story even starts.

There’s a very good reason for this, of course – children’s books need to show young readers that they can test themselves against adversity and come out on top, whether it’s something as simple as standing up to the school bully, or returning the sacred power stone to the temple of Thrum and thereby averting the apocalypse. It’s all about making a place for yourself in the world, which is very hard to do with parents around. After all, they’re the ones who are supposed to make a place for you – a safe, sheltered place where you don’t have to prove yourself to anyone, let alone return any sacred power stones. Averting the apocalypse is their job, thank you very much.

But safe and sheltered doesn’t make for a very interesting story, so why on earth did I decide to bring my protagonist’s parents along for the ride in Delivery to the Lost City, the third and final book in my Train to Impossible Places series?

It was partly because I was sure that, despite conventional wisdom, I really could get a good story out of it. My main character, Suzy, has been living a secret double life in the books so far, sneaking away from home to work as a postie in the magical worlds of the Impossible Places, after zapping her parents with a few handy sleeping spells to keep them safely out of the way. Knowing that this was to be Suzy’s final outing, I wanted to bring those two lives crashing together in the most dramatic way possible.

It seemed only natural that Suzy would confess her secret to her parents. After all, she doesn’t actually like sneaking around behind their backs – she loves them, and wants to share the excitement of her new magical life with them. Needless to say, it’s a bit more excitement than her parents are counting on, especially when they get caught up in an adventure that could save the Impossible Places at the cost of Suzy’s life.

Delivery to the Lost City, then, is a story about Suzy trying to build an understanding with her parents, and I think it will resonate with a lot of young readers. Most children don’t want to leave their parents behind, no matter how infuriating they might sometimes be – they just want to be understood, and to have their ambitions and experiences accepted by the adults who are, more often than not, the stable foundation of their lives.

So, here’s to seeing more parents of all sorts in children’s literature: single, same-sex, mixed-sex, divorced, happily married…  Whatever form they take, they’re a huge part of a child’s life, and children deserve stories which reflect that.