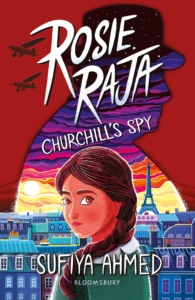 Belonging is a two-way street

I have just this week seen the front cover artwork for my new book ‘Rosie Raja, Churchill’s Spy’ which is releasing on 4th August with Bloomsbury Publishing. I’m very much looking forward to sharing the story about an eleven-year-old girl, a mixed-race princess with an English father and an Indian mother who moves to England in the middle of World War II. Her father is a spy and Rosie decides that she’s going to shadow him to help beat the Nazis.

The story was inspired from the research I did for my middle grade book on Noor-Un-Nissa Inayat Khan, the real-life WWII heroine who was sent to occupied France as one of Prime Minister Winston Churchill’s spies.

In my school visits, along with Noor, I include the British Indian suffragette, Princess Sophia Duleep Singh, as role models in my girls’ rights workshops. As a teenager interested in girls’ rights, learning about a woman who looked like me, and was a part of the suffragette movement, would have made a huge difference to me. Growing up in Britain, I have never felt that I don’t belong, but there were times when I felt that I was peeping at someone else’s history. There was the feeling that the struggle for emancipation and rights were fought by people who did not look like me.

And yet that is so far from the truth.

The suffragette movement was active at the time of the British Empire, and there were a number of Indian suffragettes who lived in England and participated in the struggle.

Last year I designed a school poster highlighting British Indian historical figures dating back to the Tudor times when trade was initiated between England and India by a license agreement signed by Queen Elizabeth I. It clearly shows that people from South Asia have been living in England for four hundred years.

The CLPE Reflecting Realities Report 2020 reveals that that one in three children of primary school age are children of colour. Whilst it is absolutely vital that we have more inclusion in children’s publishing, we should not fall into the tunnel vision that books about characters of colour are for children of colour only.

For us to strive towards a society which accepts people as belonging to this country, rather than merely tolerating people, means that books should never be considered to be for only one type of reader.

We should really challenge the idea that a book written by a certain type of author is for a certain type of child. The book should only ever be about the genre. It’s a British historical story, a horror story or an adventure or a crime solving mystery. I do believe that books should be displayed according to a genre, not the skin colour of the author.

It is crucial that inclusive books are made available to white children in schools. Books dispel stereotypes and offer a more balanced view of the world, especially those children who grow up in all white environments. I have visited schools in parts of the country where I have been told that I might be the first person of colour that the children have ever met. As a Londoner, this was mind boggling the first time I heard it – but that is the reality in large parts of the country.

I will end on the point that community cohesion is a two-way street. It is not enough for one side to strive for belonging. It is equally important for wider society to accept that people of colour belong in our country too through our shared history. Our hope is that educators who share this view can help make that change.

Stories Belong to All of Us by Christine Pillainayagam