By JT Williams, author of The Lizzie and Belle Mysteries: Drama and Danger 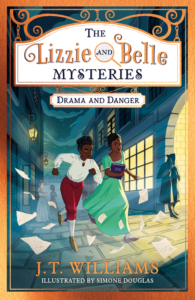 As a young reader, I lost myself daily between the pages of my beloved books. I stepped into new worlds and adopted new identities. I was Lucy, crunching through Narnian snow; Darrell, bounding around Malory Towers; Margaret, sharing secrets with God in her diary.

But for me – a girl of African and English heritage – something I could not identify was missing from those stories. Then one gloriously rainy day, I discovered The Friends by Rosa Guy in my local children’s bookshop. I was twelve.

On the cover, two brown-skinned girls stand side by side, holding hands. The taller wears a candy–striped dress, her hair braided in a side parting, a gold clip gleaming against her ebony coils. She gazes, bemused, at the apple-cheeked girl beside her, who smiles straight at us. Her hair is twisted into thicker braids from which a few tufts escape. Her grin is mischievous: dimpled, warm, knowing. As though she is sharing the secret joy of their friendship with us. Phyllisia and Edith. The Friends.

In New York, their lives – and their experiences – were far from mine in London. But the sense of joy, wonder, and homefinding that meeting those two Black girls in the pages of a book has stayed with me forever.

Throughout my reading life I did my best to replicate that sense of home. It wasn’t easy. I had to dig deep. First I discovered the stories of African American women and girls: Alice Walker’s The Color Purple, Toni Morrison’s The Bluest Eye. Soon I discovered Diana Evans’ 26a, Bernardine Evaristo’s Lara, Andrea Levy’s Never Far From Nowhere. Black British girlhood on the page.

But where were those girls in historical fiction? Or children’s mystery stories?

The Black British story is long-standing. People of African descent have lived in Britain since the days of the Roman Empire. But that Black presence has only just started to surface in our vision of the British past. Who we have seen in the streets of Georgian London, for example, has been shaped by television dramas, films and media images that repeatedly erase Black presence, let alone the women and girls we know were there.

The real Lizzie was daughter to Ignatius Sancho, the exuberant letter-writer, composer and abolitionist. Who can resist the poignant power of Sancho’s extraordinary life story? A proud African man, born on a slave ship, orphaned, sold to a family of three sisters in Greenwich, he worked his way to independence and freedom, running his own tea-shop in Westminster with his wife Ann and their children. His effervescent letters reveal him to be a loving husband, devoted father and a generous and compassionate friend.

Born to an African mother and British father, Dido Belle was great-niece to Lord Mansfield, the Lord Chief Justice. Raised at Kenwood House on Hampstead Heath, she witnessed her Uncle’s work on key slavery judgements such as the Somerset case.

Mystery offers us the challenge of agency. The writer, the historian and the detective all share the drive to dig deeper, the urge to uncover the story in hiding. In my mystery series, Lizzie is sparky, curious, courageous and headstrong. For Belle, the books in the Library at Kenwood House are her main source of comfort and company. As their friendship blossoms, each girl will bring her own unique skills and insights to solving mysteries that lay bare the complex and compelling histories that shaped their lives.

How do we learn our history? How do we come to know what we think we know about the past? History is not a fixed thing. The more we discover, the more it shifts: living, breathing, constantly renewing itself through the telling of new stories. Lizzie and Belle exist in the world for all readers curious to uncover hidden histories. They invite us to imagine a more inclusive vision of the past so that we can better imagine our shared future.

The Lizzie and Belle Mysteries: Drama and Danger is published by Farshore and available now.

The Tale of the Whale introduced by illustrator Padmacandra

If you Still Recognise Me by Cynthia So
Scroll to top