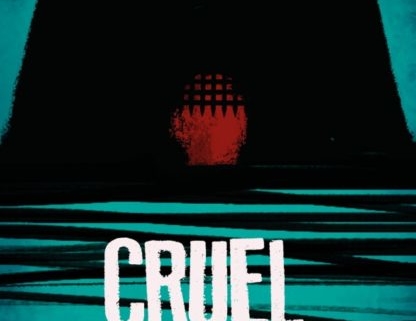 Escape or die trying is the tag line on Bryony Pearce’s latest book, Cruel Castle. Just how did she design her story and keep it fresh and terrifying? Read down to read a special guest post from Bryony about designing an escape room.

Cruel Castle, the sequel to Savage Island, had to have certain things in, to make it a sequel. Familiar characters (Ben, Lizzie and Grady), a familiar concept (trapped with psychopaths), and familiar structure (solving puzzles to survive).

However, I didn’t want to just write the same book again, so off with the island … and in with a castle.

I love escape rooms! As a family we did them regularly before lockdown, as birthday treats or days out. During lockdown we did online escape rooms, or bought escape rooms in boxes. For my husband’s birthday I designed a whole escape room in our garden (he had to work out who had kidnapped our son and save him!).

Escape rooms are awesome. Fantastical settings (from Sherlock Holmes’s England, to underground bunkers, to prison cells, Egyptian tombs, museums, space stations and, the last one we did, a sinking submarine); Puzzles to solve, which lead to another puzzle and another and another; Red herrings to follow (and work out when to drop); Equipment that needs to be used in certain ways; Secret rooms; Props; Costumes. Escape rooms are creative, thought provoking, competitive and great fun. Everyone in the family sees things in different ways and contributes different things. My husband was shocked to find how hard it was to solve a room on his own, without input from the rest of us.

But for this novel I had to design a castle that wasn’t just one escape room, but several.

I started with the basic layout and drew a map of the floors that the characters would have to navigate. Then I named the rooms and decided to use the rooms themselves as inspiration for the big puzzle in the room. So, the music room contains a music-themed puzzle, the library contains a puzzle linked to books and so on.

I also wanted the puzzles to relate to the Gold family in some way. So, solutions often include the word gold, things that are related to gold, or the chemical symbol for gold, for example.

Further I needed puzzles that played into the character’s strengths, or took advantage of their weaknesses. Bella, for example, plays the piano, and her skills were used in the music room.

I had to come up with puzzles the characters could solve, but not easily. That readers could also solve. That would lead from one to another seamlessly.

It being a psychopath’s castle the escape rooms would also have to contain traps. But they also needed to follow the rules of the escape room. You shouldn’t need to use force to solve a puzzle. For example, if there is a locked cupboard, the key will be around somewhere. Red herrings are allowed, but it has to be clear what kind of solution is needed. For example, if there is numbered keypad that locks the door, then there will be numbers in the room to find, and you won’t be able to open the door any other way.

Real solutions in this castle can’t be dangerous. If participants follow the correct route through the puzzle, they will likely survive. Shortcuts result in traps.

I had a lot of fun designing the escape rooms in this castle. And I’ve designed another one for school visits! I promise the participants will all survive that one though.

Battle for Roar- Q&A with Jenny McLachlan
Scroll to top