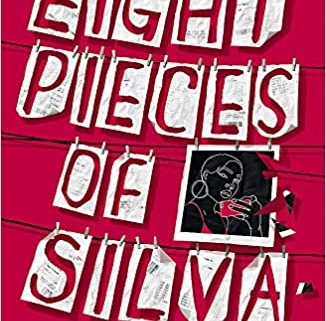 Patrice Lawrence is known for her incredibly popular, brilliantly written YA titles such as her debut Orangeboy, Indigo donut, Rose Interrupted, and publishing on 6th August is Eight Pieces of Silva. Winning both the Waterstones Book Prize for Older Readers and the YA Book Prize (2017) for Orangeboy, Patrice has continued to win recognition for her published titles, and Eight Pieces of Silva will be no exception.

The tagline to this book is ‘An addictive mystery that refuses to let you go long after you turn the final page’ which gives you an indication as to what to anticipate when you read about family life for sixteen year old Becks whilst living with her Mum, Stepdad, and his eighteen year old daughter Silva. When Becks Mum and Stepdad go on holiday they leave Silva in charge – but when Silva doesn’t return from seeing the parents off at the Airport it is Becks that takes charge of the situation and looks to uncover the mystery of what has happened to Silva.

Silva wore it to a Marvel dress-up party, but it’s really about being an outsider and the roles we perform to look like we’re fitting in.

Searching Silva’s bedroom for any clues as to where she could be, and what might have happened, Becks happens upon the first of eight clues regarding her sister’s secret life, and so the unravelling of the mystery begins. With unbelievably brilliant mysteries in mind here are eight additional YA mystery stories to really sink your teeth into –

Be sure to check out other stops on the Eight Pieces of Silva Blog Tour, details of which can be found below

Eight Pieces of Silver is published by Hodder, and will be available from 6th August 2020 in all good bookshops.