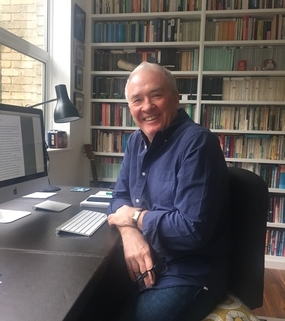 Welcome to our first blog of 2022, written by the wonderful Tony Bradman. In this blog, Tony writes of wishing there was more historical fiction to read when he was younger and the ways in which Viking Boy is received by school children.

Great adventures can sometimes start in very ordinary circumstances. For example, take the adventure Bilbo Baggins finds himself involved with in The Hobbit by J.R.R. Tolkien. At the beginning of the story Bilbo is standing in the doorway of his cosy little Hobbit house just minding his own business. Then the wizard Gandalf happens to come by, and in what seems like the blink of an eye Bilbo is sent off an an adventure that includes angry dwarves, trolls, a dark and scary forest, a dragon guarding a treasure hoard sought by the said dwarves, a magic ring, and, oh yes, a huge battle involving five armies.

I first encountered Bilbo and his adventure in very ordinary circumstances myself. In my last year at a very ordinary state primary school in South London (a long time ago!), my teacher Mr Smith read The Hobbit to our class, and I loved it. There were probably 40 kids in that class, and I don’t remember Mr Smith being a particular dramatic reader of the story. But the simple experience of hearing a great story being read aloud was the beginning of my life-long adventure in books and writing. Pretty much from that moment on I became an obsessive reader, and eventually that led to me becoming a writer.

There was even more in that experience than I realised at the time, and for many years after. I discovered later that Tolkien was for many years Professor of Anglo-Saxon at Oxford, and was an expert in the whole world of northern European languages and myths and legends. So The Hobbit and The Lord of the Rings (which I also read obsessively in my teens) are full of characters, themes and tales imbued with the culture of the Anglo-Saxons and the Vikings. Anyone who reads his work is immediately at home in the world of Beowulf and the Icelandic sagas – those dwarves make an appearance in one.

So it’s no surprise that I became interested in all that myself. I read lots of historical fiction, of course – Rosemary Sutcliff, Henry Treece and many others – but I also read lots of history too. I started my career as a writer of children’s books with poetry and picture book texts, then moved up the age range to beginner readers and short fiction. I also read The Hobbit to the oldest and youngest of my children at different times), and The Lord of the Rings to the oldest as well – it took a year, but it was great (I enjoyed it, anyway!).

I’d always had a yen to write a Viking story, and eventually an editor I knew at Walker Books asked if I had any ideas that would make a good graphic novel, as they were developing a new series in that area. I already had the title Viking Boy – it had just popped into my head one day and I knew it was a good one. So I then developed a story to go with it. That took a long time, and it took me even longer to write it (I think I missed the deadline by a year). We also decided it would be much better as a straight novel.

Viking Boy was published in 2012, and I’m enormously proud of it. I always say that it’s the book I would have loved to read after The Hobbit when I was 11, and it’s certainly done well. Schools have picked up on it and I get lots of tweets from classes who have had it as their class reader when they study the Vikings in Year 5 or 6. I love the idea that teachers are reading my story to children just as Mr Smith read to me and my class. I always reply to those tweets, and often do Zoom calls so I can read to them too.

I did a kind of follow-up to Viking Boy. Anglo-Saxon Boy is about the son of Harold Godwinson, the half-Danish King of England who died at the Battle of Hastings, so there’s plenty about the Vikings in that too. Anglo-Saxon Boy won a Young Quills Award from the Historical Association in 2017, and I often hear from classes who read it when they study the period. I loved doing the research (always a good excuse to buy lots of books!), and I thought it might be good to do some non-fiction too. That has led me to write to my latest book – Viking Boy: The Real Story (Everything You Need to Know about the Vikings).

It really was great fun to work on, especially as my publishers came up with a great suggestion for making it different from other non-fiction history books. Their idea was for me to make the narrator of the book Gunnar, the central character of Viking Boy. So Gunnar (and some of the other characters) take you through the facts of Viking life, explaining the culture, the Viking Gods, their art, the life of a Viking warrior, Viking poetry and myths. I’m pleased to say it’s brilliantly designed and illustrated as well.

It’s also another book I would have loved to read when I was 11. Sometimes I wish I could time-travel back to that South London classroom all those years ago, to when my reading and writing adventure began. I could never have imagined where that journey – the one that began with a human voice reading a gripping story – would take me. I only hope that some of the children who have encountered my books will be inspired to go on similar reading adventures themselves. There are magical worlds waiting for them.