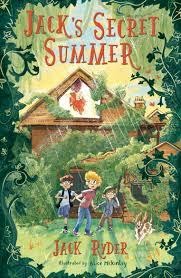 Jack’s Secret Summer is all about an incredible mystery surrounding an empty house, a young girl searching for her father and a group of boys forging new friendships.  Jack hasn’t many friends until neighbours Bruno and Rocco invite him to hang out with them.  Their daring escapades lead them to the empty house, where vines grow inside and out.  The vines seem almost alive…and then they meet Girl.  Perfect for fans of Roald Dahl!

I had the honour of reading the book and devising some questions for Jack Ryder, author of the book.  His answers are fantastic- thank you Jack for taking the time to answer!

Can you describe your story in a sentence?

The story is about a boy called Jack who, along with his new friends, discovers an old empty house and in it a girl who introduces them to a world of magical secrets.

Is Jack inspired by yourself?  Are there any characteristics you share in addition to your name?

Yes. Jack’s character is inspired by myself and I would say that we share quite a few characteristics. Growing up I was never as daring as my friends appeared to be. I can remember marvelling at their bravery. I feel Jack is also like that at times, particularly with Bruno and Rocco. He admires their boisterous and care-free natures and I think he wishes he could be as silly and fearless.

How important is the absence of parents to the summer of adventure for the boys?

When it comes to embarking on an adventure like this one the absence of parents is pretty crucial. I imagine that parents asking questions might spoil their exciting plans to stay out all day. It would’ve been a challenge to come up with some convincing explanations given all of the changes that these kids go through!

The mystery of Girl and the clues to her story are so well thought through and planned- was this a challenge to ensure they all linked in the right way to lead the reader on the journey with Jack, Bruno and Rocco?

It was a challenge. One that was supported by my brilliant editor. As I got to know the story so well it was invaluable to have her perspective to help navigate the readers viewpoint.

Your book is “perfect for fans of The Famous Five and Roald Dahl”- how does it feel to be compared to such literary greats?

It’s extremely flattering to be mentioned in the same sentence as two such prolific writers. Particularly Roald Dahl. I loved reading his books when I was a boy and he’s been a huge inspiration to me over the years.

What are you currently reading?

I’m currently reading a book called ‘Once’ by Morris Gleitzman. It’s about a boy who escapes from an orphanage during the second world war. I really enjoy reading children’s literature and it inspires me to write more.

Jack’s Secret Summer was published by Hachette on 28th May 2020.

The opinions expressed may not truly reflect those of the FCBG.

Tales of a Toothbrush
Scroll to top