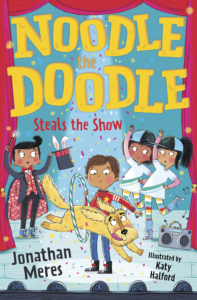 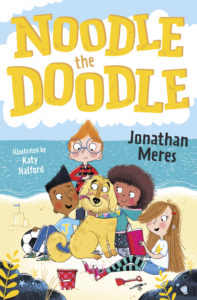 It will come as no major surprise to anyone who follows me on Twitter, that I’ve ended up writing a series of books about a dog. Because that’s pretty much all I ever tweet about these days. More specifically, my labradoodle, Pablo, who’s lying by my side as I write this and whose photos and videos gets infinitely more ‘likes’ than my half-bottomed attempts at being funny, profound or bitingly satirical ever do. Weirdly enough though, it was actually my editor’s idea in the first place. My editor at the mighty Barrington Stoke, that is. Because when she asked me, in 2019, to come up with some ideas for possible future books – and I duly obliged – not one single one of them featured a dog. Looking back now, that seems scarcely feasible. But it’s absolutely true. Despite all that ‘write what you know’ stuff that us children’s authors are constantly telling actual children, it simply didn’t occur to me at the time. 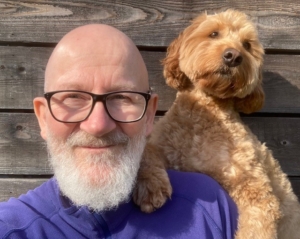 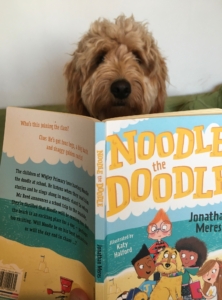 Anyway, I think it might have been me (and please forgive me if it wasn’t, Ailsa) who came up with the premise of the eponymous Noodle the doodle being a school therapy dog. Having visited literally hundreds of schools over the years, I’ve seen at first hand – or should I say, first paw? (sorry) – the benefits that a so-called ‘therapet’ can bring. And being set in a school – in my head, it’s the tiny village primary school in Leicestershire I attended back in the late 1800s – there’s no shortage of potential story lines. Hence so far, we’ve had an outing to the seaside, a talent contest and in the latest, Noodle the Doodle Wins the Day, a school sports day.

In terms of my actual writing process and the age-old ‘pantser or plotter’ debate? I’d say I’m probably somewhere in the middle. Actually thinking about it, that’s not strictly true at all. I’m definitely more of a pantser. What that means is that I’ll normally start with a reasonably good overall idea of what’s going to happen. The journey, as they say, from A to B. It’s just that I don’t always know how I’m going to get there. And more often than not I’ll end up taking the scenic route.

And when it comes to ‘tailoring’ my storytelling for the Barrington Stoke list? Honestly? Whisper it softly, but I don’t really. Not anymore anyway. I certainly used to back in the day – and I wrote my first book for BS over 20 years ago! – when I was very conscious of certain house rules, such as making sure the story was linear, with a clear beginning, middle and end, with no flashbacks or jumping about in time. Oh, and definitely no adverbs! (See what I did there?) That was in the days when every Barrington Stoke author could expect a marathon phone call from legendary co-founder, Patience Thomson – who would meticulously go through the whole manuscript, word by word and line by line. I used to quip that I spoke longer on the phone to Patience than I’d ever spoken to my wife for. And that wasn’t far off the truth. I remember once, we actually took a ‘comfort break’ halfway through! Of course, there are still certain house rules and do’s and don’ts, bearing in mind the core readership. But the main thing as far as I’m concerned, is writing an engaging and hopefully entertaining story, that anyone can read. We can iron out any wrinkles and unsuitable vocabulary in the edits.

Oh, and here’s a funny thing to end on. Well, not that funny, thinking about it. But anyway, shortly after the first Noodle book came out in September 2020, I was diagnosed with cancer. (I know, right? Like 2020 hadn’t quite been rubbish enough already!) Pablo was already a much-loved and integral part of the family, as well as my near constant companion. But since then? There’s no doubt whatsoever he’s helped us all through some pretty challenging times. I can’t imagine life without him. He makes me laugh at least a hundred times a day. So, you know? Talk about life imitating art and all that. I use the term art in the loosest possible sense, by the way. But you know what I mean.

Being a Branford Boase Award Judge by Struan Murray