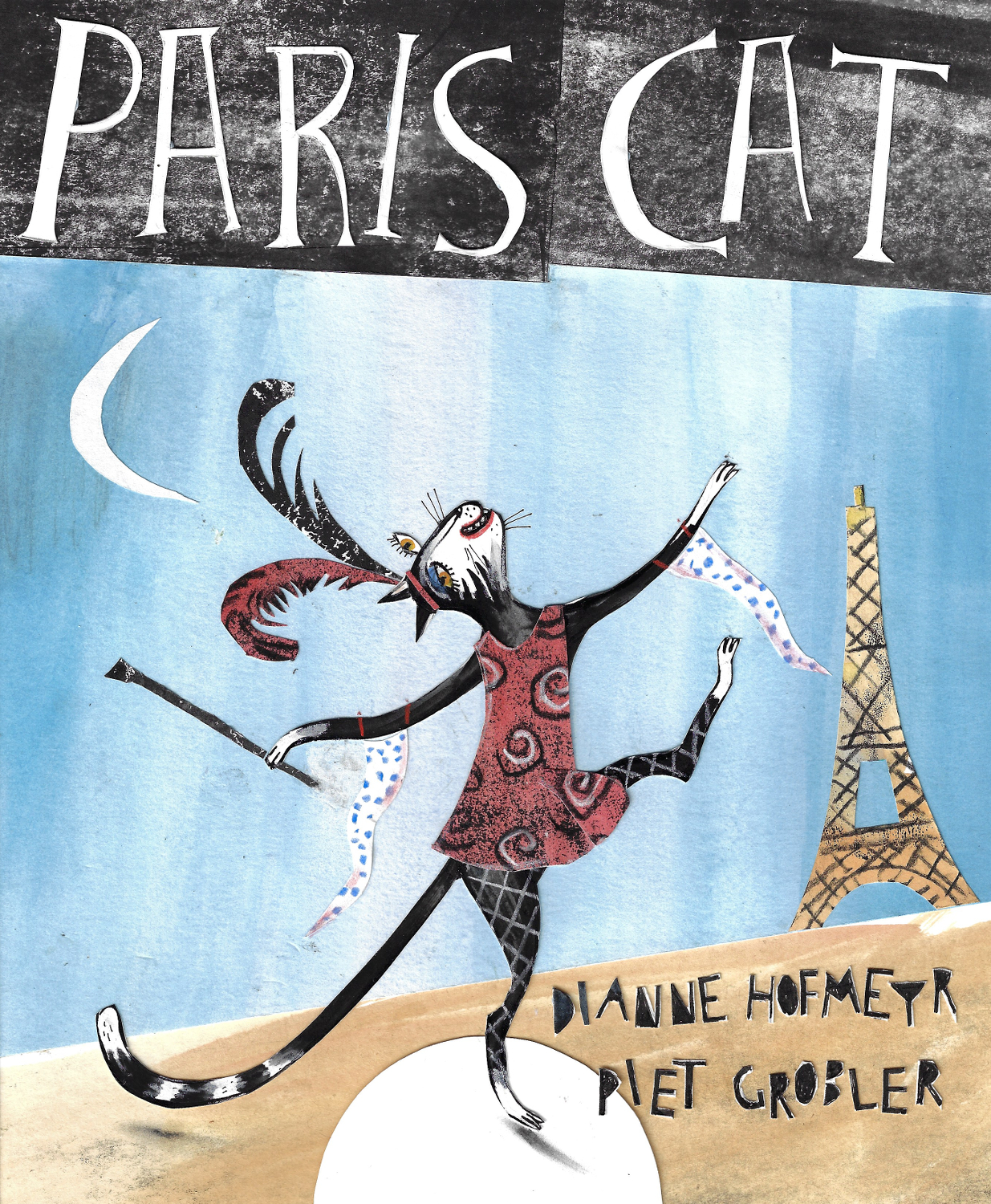 Story encompasses all three… so what a delight FCBG have
chosen to celebrate National Share a Story Month under this banner. Every story
ever written is part MYTH, part MAGIC, part MAYHEM. Modern stories are as
mythic as those set in the far distance of traditional myth.

The MAGIC part is they drift into a writer’s psyche from
some unknown past. Some stories come fully formed, others come bit by bit. But
all arrive without being commanded.

And the MAYHEM part is the writer bringing together these myriad
tiny jigsaw pieces of the imagination to form a convincing whole, which emerges
as if nothing else was ever planned.

PARIS CAT is
total MYTH. How can a cat become a dress-designer and take to the stage with
Josephine Baker? Its total MAGIC and MAYHEM too. It came unbidden into my head
from a number of things… my own attempt at dress-making, (when girls whipped
out a metre of cloth and got busy on a sewing machine to make a dress for a
date that night!) listening to Edith Piaf on vinyl, Paris being the second
overseas city I’d ever visited when the entire family plus friends camped in a
single tent in the Bois de Boulogne, and finally years later visiting my son’s
partner’s Design Studio in the heart of Paris… all these chaotic jigsaw pieces
coming together to create a story out of randomness.

There’s MAYHEM too in the story itself. A cat from the back
alleys of Paris has aspirations. Quick as can be, she follows the hero’s
journey of stumbling blocks, trying and failing and trying again until she becomes
famous for her dancing.

But wait! Is this the life she wants? What about the friends
and family she left behind in the alleyways. Voila! She starts her own
night-club and along come the coolest of cats to dance the night away in
outfits Madam Kitty herself has designed.

From Ben Harris in his blog A FEW TO
READ…

“It’s
a book that demands to be read out loud, with delicious phrases throughout that
chime and charm the ear…

The
scissors may ‘scrimp’ but the prose-poetry certainly doesn’t, leading children
through the joyful abundance and sonic glory of
language: atelier, claw-stitched, seamstress, dressed to the nines are
just a few examples that appear.

Then,
of course, there’s the delightful story itself: breathless in its exuberance,
the tale of Kitty who leaps from one ‘life’ to the next – one minute a clothes
designer, the next a stage performer and then…what next? – will encourage
young children to follow their own dreams, to act on their passions and
interests. The book will also appeal to the adult reader who may be sharing the
book with a child or a class: there are cameos from Edith Piaf (who has to compete
with a caterwauling intruder!) and Josephine Baker (who temporarily adopts
Kitty into her stage show).

For my own part, Paris Cat would not be Paris Cat,
if it were not for the incredible illustrations of Piet Grobler who captures Cat’s
sheer exuberance and that distinctive Parisienne era with plenty of humour too.
The endpapers give us a cat’s-view-map of Paris, where tourist hot-spots are noted
only for their usefulness in pointing the way to the nearest poissonneries –
just follow the red, walking tour lines! 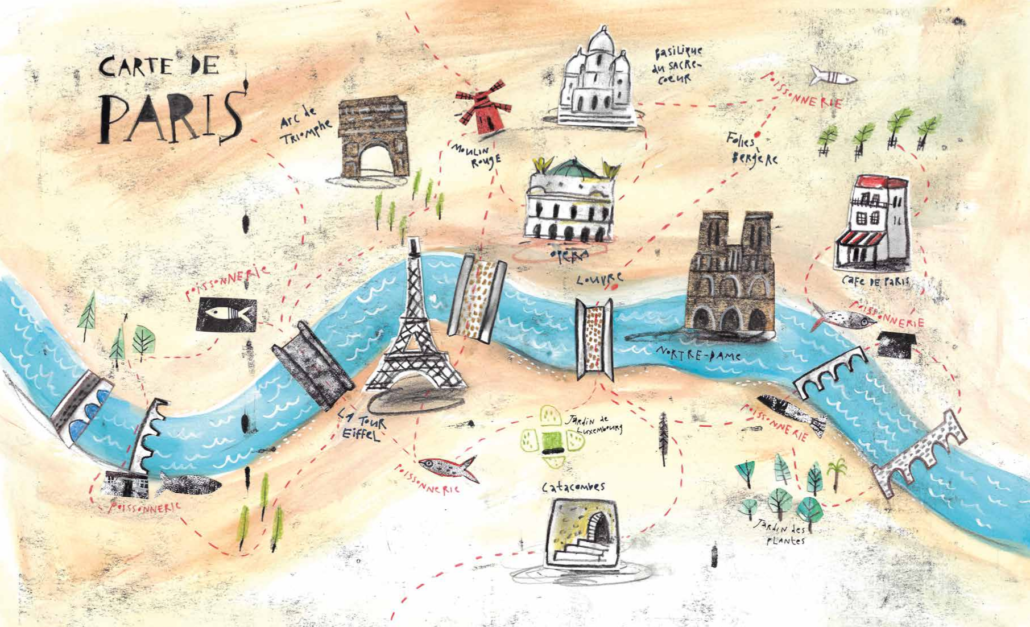 For exuberant children, these two videos will provide some fun:

Make a Paris Cat and design your own paper and fabric dresses.

Construct a Shadow Puppet Theatre and stage your own show.

PARIS CAT is published by Tiny Owl Publishers and available
through their website https://tinyowl.co.uk/
and all good bookshops.

I had to smile when I realised that National Share a Story
Month’s theme indeed related so well to my own process of creating the
illustrations for Paris Cat.

Mayhem? Certainly.
We were doing a trial living in Portugal for six months, and the duplex we called
home had only one dining table in a room without good daylight. But that was
the ‘studio’ in which Paris Cat had
to come alive. When leaving South Africa, I had only just decided on what
technique and mediums I would use. Most illustrators change their minds early
(sometimes later and sometimes often!) in the process. So, in addition to my
usual watercolour, brushes and pencils, I also packed my print-making roller,
gouache, acrylics, cutting mat, cutters, scalpels and charcoal pencils. I did
stop short of packing paper. One can only fit so much into two suitcases. My intention
was to mimic print techniques used in visual art and advertising in the Art
Deco style. Paris in the era of Edith Piaf and Josephine Baker was the setting
of Paris Cat, after all.

Myth? It is a myth
that an illustrator cannot work without a visit from the mythical muse, and
that all circumstances have to be ideal in order for the art to happen. Said
dining table and room lacking in daylight is proof of that. Ultimately a picture
book is also a commissioned, commercial object with a potential readership and an
aspect of the market in mind. One cannot afford the fine art luxury of waiting around
to be inspired to make art for its own sake. After all, there is a deadline!
You just have to make it happen. Much of the inspiration is brought over by the
author of course. Through reading Dianne’s text and by ‘hearing’ Cat speak, I had
a fairly clear idea of who our main character needed to be and what she was to
look like. Limited colour and stylisation would recreate Art Deco Paris and
whimsical ink drawings would best capture Cat’s cheek and sassiness. I had to realise
it visually, but the groundwork had been laid out by the writer. The publisher would
also communicate their vision of the book with both of us. By determining the
format and size and intended readership of the book-to-be, they add to the
creative and contemplative process.

Once the illustrator has figured out the visual language,
medium and technique most suitable for telling the story, and once he inhabits
the studio like a mouse in his nest, the truly magical phase starts. Now the narrative really has a life of its
own. Now comes hours, and weeks, and months of playing with ink, paint, crayons,
scissors, roller and glue … often to the music of Piaf. In good time, my
version of the alley ways and cafés of 1930s Paris started to materialise on
paper. And so, before we had to leave Portugal again, my work was done.

The story of a street cat who re-invents herself, becoming a
star adorned with tulle and taffeta, and sharing the stage with Edith Piaf and
Josephine Baker, is truly the stuff that dreams and magic are made of. But the
story is also more than make-believe. It is a little window to reality: sometimes
women have to be strong, confident, inventive and resilient when life has dealt
them a bad hand of cards.

But what a good hand I had been dealt. What an honour and what
fun it was to have co-created this story with a team of strong women. Thank
you, Dianne and the Tiny Owl team!

Myths, Magic and Mayhem: A Dyslexic Author and the Fantasy World of Presadi...