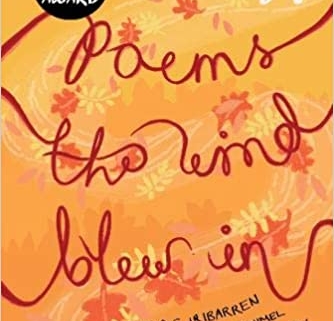 It was a great surprise for both myself, as translator, and the poet Karmelo C. Iribarren, when we first learned that POEMS THE WIND BLEW IN had been shortlisted for the CLiPPA. Karmelo was pleased but a bit bemused at this interest from the UK and somewhat dubious that the book stood much of a chance, since it seemed to have so many strikes against it: the book was 10 years old (he was basing this on the date of first publication in Spanish, not the recent English-language translation), not written in English, by a foreign author…

I was thrilled and especially proud for precisely those reasons: this was the very first time a work in translation had ever been shortlisted, and it had done so on an even playing field competing against works originally written in English. (George Szirtes won for his selected poems for children, IN THE LAND OF THE GIANTS, which did include some translations but was primarily his own work.)

I was also both relieved and pleased for The Emma Press, who had taken such a chance on this project, and has done so much to support children’s poetry in translation. I’ve now checked my files and I first pitched this book to editor Emma Wright in early 2015, knowing she’d never published a translation (back then) but thinking this project would appeal to her sensibility. So while it was a long road until publication, it seems that everything was meant to be, with first a PEN Translates Award from English PEN that supported the translation and made publication possible, and resulting now in this wonderful Highly Commended Award and many more readers for Karmelo’s lovely poems.

Because that is, really, the impulse behind this whole project. I am both a poet & translator, but I am foremost a reader, and I had been a fan of Karmelo’s work for adults for many years. So when he published a new collection, I immediately went out and bought a copy–even though a collection for younger readers was a departure from his earlier work. But his poetic eye is essentially the same, and as I was reading these poems, with their fresh & surprising way of looking at the world, I knew I wanted to translate the book into English, to help share it with more readers. That is, for me, one of the things I like most about being a translator–falling in love with a book and helping it get into the hands of more people so they can fall in love with it as well.

And there is so much to fall in love with in these spare, seemingly simple poems, that make you reexamine how you look at the ordinary things around you. Now, whenever I see so many things you can’t actually see, like the wind, as it ruffles the pages of a newspaper or a magazine, or makes the branches of the trees sweep the skies, I see them through Karmelo’s eyes, through his poems, these brief lines that have forever changed how I look at the world. Now, for me, every abandoned plastic bag, aside from infuriating me about mankind’s carelessness about the environment, also reminds me that it dreams of a gust of wind to help it feel like a cloud.

Karmelo’s way of looking at things is so universal. The struggle for me, in the translation process, was to make the English versions be as spare and elegant as the originals, so most of my time was spent polishing and revising, rather than that heady first rush of the translation, of transposing the words and ideas from one language and culture to another.

The Snowflake
Scroll to top