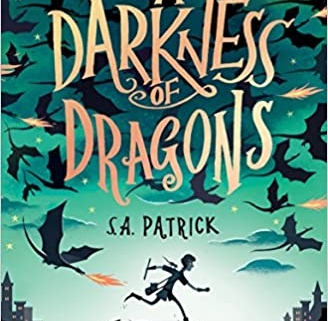 S.A. Patrick is the author of the hugely popular A Darkness of Dragons and it’s newly published sequel, A Vanishing of Griffins. Usborne are the lucky publisher to send a twist on the tale of the Pied Piper into the world. With the perfect blend of adventure, myth and magic, these books will delight and enchant readers of middle grade fiction. It was brilliant to ask S.A. Patrick a few questions about his books- read on for his superb answers!

What drew you to the tale of the Pied Piper?

I used to work as a games programmer, and in my spare time I’d try and make my own games. The starting point for the book was an idea I had for a music-based game, which needed to be centred around a very simple instrument and have a compelling story. The Pied Piper came to mind at once. I’ve always been fascinated by it, especially by the way the story has its roots in something real – depicted in a stained-glass window in the church in Hamelin in 1300, and mentioned in the town chronicle of 1384, which reads “It is 100 years since our children left.” The mysterious origins of the tale, and the shifting versions of it that have appeared in subsequent centuries, give it a magical quality. The truth is forever just out of reach, and we can embellish it however we choose.

Patch is a brilliant character- brave and loyal but full of enough self-doubt to make him relatable to the reader. Is he based on anyone?

He’s not based on anyone specifically, but of the three main characters he’s closest to me in nature, at least as far as the self-doubt goes! His courage is something I aspire to, certainly – I’m not exactly a brave person.

Music is central to the story – are you musical?

I love tinkering with music, but I’m all thumbs. I play around with keyboard and guitar, but I’ve never got past the really basic stages, which frustrates me terribly. Using a computer to help makes it more fun, so that’s what I do.

That’s an interesting one! I would dearly love to be able to play an instrument well, and I don’t think most animals would have anything to say that you couldn’t already guess. On the other hand, playing an instrument is a skill many people have, while talking to animals would be unique, and there are definitely some species I’d love to chat to – so the animals win! I mean, who wouldn’t want to say hello to a whale?

Prophecies foretold can easily be mistaken- have you ever had your own fortune told? Would you want to know what your future holds?

I’m not one for fortune telling. If claims are made for such extraordinary powers yet can’t be backed up with evidence, I’m inclined to think it’s hogwash, no matter how appealing it is.

Besides, knowing what your future holds would be a double-edged sword, so I’d want to be able to pick exactly what I knew! In fiction, prophecies are as mischievous as genies – there’s always a gotcha moment…

Barver the Dracogriff might be my favourite character- an intrepid traveller with very thick skin- how do you imagine him when writing?

I do love Barver, but I have to admit I don’t have a precise image of him in my head. I wanted him to be a rather ugly creature at first sight, who didn’t seem ugly at all once you got to know him. He’s part dragon, part griffin, and part Gonzo from the Muppets.

I love the titles of both books- how easy were they to come up with?

The titles weren’t easy at all! As I wrote the first book, the working title was just ‘Piper’, and we went all round the houses trying to find something the team at Usborne were happy with. We finally came up with ‘A Darkness of Dragons’, which I love because there are two meanings; the second isn’t something we learn until the end of the book and discover why the Hamelyn Piper did what he did.

‘A Vanishing of Griffins’ wasn’t as difficult, as I knew griffins were going to be a big feature of the second book. You’ll have to read it to see why I chose ‘Vanishing’…

My Passion for Point Horror