It is the 10th birthday of the lovable George, one of Chris Haughton’s most well known books! We sent some questions across to Chris about this book, character and illustration.  He has sent back the most brilliant answers! 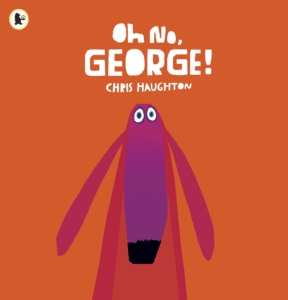 Your picture book Oh No, George is 10! Congratulations. Your lovable dog has proved reallypopular with young readers and their parents. What do you think it is about George that appeals?

Spending time with a dog (I had three rescue dogs growing up) makes you realise how similar we humans are to them. I think we can all relate to the struggle to do the right thing. Temptation comes in all forms but whether we are a two-year-old, an adult or even a dog we can all identify with the struggle to resist cake!

Did you have a dog that inspired George?

When I was younger, I had a dog Tammy, who was a lovely Jack Russell-Labrador cross. One year she ate all of my sisters Easter eggs, so I had to give my sister half of my eggs. Everyone was upset!

In terms of when it came to creating George, I usually draw from my head without using much reference but I found myself googling ‘guilty dogs’ to see if I could find some good material. It turns out there’s a lot about this on the internet.Watch the guiltiest dog on the internet, Denver’s reaction after his owner discovered he’d eaten the cat’s treats.

Where did your career begin and how did you get into picture books and illustration?

I went to the National College of Art and Design in Dublin and started out creating adverts and designing for fair trade brands like People Tree. But I’d always wanted to make a picture book and it became a bit of a running joke with my friends about whether I’d actually ever do it. My studio mate set me the challenge of completing a book and taking it to the Bologna Book Fair. Remarkably, it was picked up by a Korean publisher, Borim Press, and became A Bit Lost, in Korean! I brought the book back to the fair after it was published and Walker Books picked it up and published in it English and I’ve worked with them ever since. This October, my seventh book, Well Done, Mummy Penguin, will be published.

How long does it take for you to write and illustrate a book, from idea to publication?

It takes me two years to write each book – that’s an average of one word for every six days! I’ve tried to do it faster but I have never managed to speed it up. It’s not exactly the writing speed most writers aim for… But one of the things I always try to do with my books is to tell stories as much as possible through images rather than through words. If the story can be read without language, it should have the ability to be understood by the very young.

With Oh No, George!, I definitely had second book syndrome and was struggling with an idea. The thing that helped me overcome it was learning about clowning one summer.  It was a revelation. It had never occurred to me that there was a similarity between clowning and picture books. It felt like I was being let in on amazing secrets to craft funny sequences

How does it feel to know that George has been adapted for the stage?

It’s the most exciting thing that’s happened in the 10 years since the book came out! I was absolutely gobsmacked when I first saw the Oh No, George! show from theatre company Can’t Sit Still and I love it. I went to the opening of the London leg of the nationwide tour at Jacksons Lane earlier this month and it was the perfect way to celebrate George’s birthday – it is so fun and interactive and the kids loved it.

Have you been involved in the stage adaptation?

Yes, it’s been great to collaborate with Can’t Sit Still – we’ve met in person a few times and exchanged ideas over email and Zoom. I’ve enjoyed seeing the clown-like elements of George and the slapstick humour play out on stage. I’ve also just worked  with the artistic director Cat Boot and her team, narrating a brand new, free interactive digital version, called What Will George Do?, which gives children the power to decide how George is going to behave. I think it brings out the best of the book and show!

The 10th anniversary edition of Oh No, George! by Chris Haughton is out now (Walker Books, £7.99)

The Hunt for David Berman by Claire Mulligan
Scroll to top