Claire Mulligan is an Irish debut author, whose children’s stories have been published in The Caterpillar magazine and she has written and recorded for RTE Radio 1’s Sunday Miscellany. In 2018 she won third place in the RTE Radio 1 Francis McManus Short Story Prize. The Hunt for David Berman is her first middle grade novel, which explores the friendship between two boys – one British evacuee and one German refugee – against the backdrop of the Second World War. 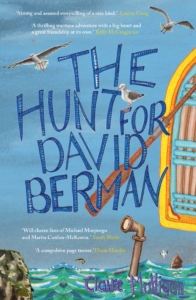 Can you tell us a bit about your new book?

The Hunt for David Berman is an exciting war time adventure set on the wild coast of 1940s Scotland. Robert, his mother and younger sister Elsa have been evacuated to his grandparents’ farm. Robert cannot get used to life in the countryside and misses his home in London and his dad, who is away fighting. Robert’s mother is recruited to work at Bletchley Park leaving Robert and Elsa in their grandparents’ care.

The farm is on the coast and while exploring the cliffs Robert finds a boy called David living in the caves. David is German and a Kindertransport child who left his mother and grandmother behind in Berlin. He has run away from his cruel foster family nearby.

Meanwhile at the Gestapo Headquarters in Berlin it is discovered that an Enigma codebook has been stolen and that it was placed in David’s suitcase. A Nazi secret agent is instructed to find David, retrieve the codebook and kill the boy.

Although this is an adventure story it has the friendship between Robert and David at the heart of it.

How do you explore the theme of Belonging through David’s character and back story?

David has been through a much harder time than Robert by the time we meet him. His mother found a way for him to leave Berlin, just on the cusp of war. However she and David’s grandmother cannot find a means of escape, and David finds it very difficult to accept that he has had to leave his family and his home. He is a refugee far from home and even though the McKettridges have taken in him he has no sense of belonging with them. The father is violent and David decides to run away, and so becomes a fugitive. He is living in a cave completely alone by the time Robert discovers him.

In many respects David shows huge strength of character to fend for himself alone in a country he does not know at a time when anybody who was German was seen as an unwelcome, dangerous ‘enemy alien’. He sets up home in the cave using found materials for a chair and a table and decorating it with shells and driftwood. He is practical by nature – he knows how to cook and forage food for himself but the strain on him emotionally comes to the fore when he tries to recall the sound of his mother’s voice or when he thinks of home; he cannot bear it and consistently suppresses his pain and loneliness. David knows that he doesn’t belong anywhere – he is afraid of being discovered and sent back to Nazi Germany, a country that is most certainly not his, or being sent to another camp in Britain. He understands that he carries his home and sense of belonging in himself. At one point he says to Robert “This cave is all I have for now. It’s not where my real home is. My real home is in here (he taps his chest) … where I carry Mama and Papa, Oma too”.

It is Robert’s friendship that gives David a chance to belong and have the emotional support that this brings. They spend time together doing ordinary things – fishing in the rock pools, reading comics, sharing food and telling stories about their lives. Robert can see the physical toll that living in the cave is having on David and he encourages David to move to the barn at his grandparents’ farmhouse. Robert sets up a new home, a safe space, for David, giving him practical things like soap and a towel, hot food and drinks but also books and a box to keep his beloved stamp collection in. It is this friendship that gives David a sense of belonging and the hope that perhaps things will turn out alright.

… And through Robert’s character and family life?

Robert’s experience of the war is different from David’s. He is evacuated to his grandparents’ house along with his mum and younger sister. In the past they have only holidayed there for short visits and although there are family ties, things are still difficult for Robert. His mum soon leaves to work in the war effort and it becomes apparent that his grandmother does not approve of Robert’s city ways. He doesn’t like having to help around the farm, he is scared of the dark and often gets in trouble. He is missing his father who is serving with the RAF and he frequently wets the bed, much to his grandmother’s annoyance. Robert misses his life in London, his home, his friends, the cinema and all the variety that city living brings and wishes that he could go back to it. He has been placed in the local school where he gets teased for sounding different and being good at schoolwork. He is left out by the other boys and has no friends among them but he doesn’t tell his grandparents any of this. So although Robert is in the community in a place he knows and has the comfort of a familiar setting in his grandparents’ house he still feels out of step and not properly at home. Both boys are navigating an unbelievably stressful situation without the comfort and support of their parents and both are away from the groups of people who would have provided a sense of belonging in their previous lives. It is the boys’ friendship with each other that provides them with the chance to belong to each other; they share a common bond of being away from their homes and being separated from those they love.

Despite the difficulties the boys are facing and the frightening backdrop of the war, David and Robert find themselves having quite the adventure – what made you want to write a thrilling adventure story?

I loved reading adventure stories as a child and I especially enjoyed books that had a historical backdrop like The Silver Sword by Ian Serraillier. For me a story seemed very believable if I found that certain events actually happened in real life. My next step was to imagine what if that happened to me, what would I do in that situation? I love the fact that children can find excitement and even wonder in difficult situations, that they can make the best out of things, and that they are open to the possibility of adventure. I was not an especially brave or adventurous child so reading adventure stories allowed me the excitement and thrill of them without any actual risk. I think there must be plenty of children who, like me, prefer their adventures to be safely bound in between the covers of a good book!

Can you see the book being used in schools?

Yes, absolutely. I think The Hunt for David Berman could be used as starting point for discussing difficult subjects such as war, The Holocaust, anti-Semitism, refugees (in the past and present day), how we choose to treat one another. It is also a story about friendship between two boys from very different backgrounds. Robert is quick to judge David when he finds out that he’s German – he can’t believe he is friends with the ‘enemy’ but then when he understands a little more about David’s life he realises that he and David are very much alike and he shows himself to be a trusted and loyal friend. A lesson in not judging a book by its cover!

What do you hope readers will take from the book?

I really hope that the reader will see that friendship and kindness are so important for all of us and that even small acts of generosity can make a huge difference. That it is worth taking the time to be kind to people, especially those that might be seen as ‘other’ by society.

What are you writing now?

I am currently working on my second novel which is set in 17th century Ireland at the time of Oliver Cromwell’s arrival. Although it is based on historical events it is in the magical realism genre featuring changelings, folklore, old magic and the Otherworld!

The Hunt for David Berman by Claire Mulligan is published by The Moth on 5th May 2022, £8.99 paperback.