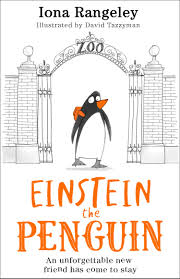 We were recently given the opportunity to ask Iona Rangeley a few questions about her debut novel, Einstein the Penguin.  Thank you to Iona and HarperCollins for making this happen!

Where did the idea for Einstein come from?

I started down the route of writing children’s books whilst I was at university. The first book I wrote was actually something completely different, and it was a bit all over the place, but that’s what got me an agent. Then when my agent mentioned that someone had told her they would love to read a modern Paddington, I started to play around with the idea of what that would look like. I ended up with an image in my head of a polite mum telling an animal it could come to stay any time, and the rest of the story grew from there.

Did you always envisage the main character as a penguin?

Yes, I did. I love animal characters that you can imagine as half-human, that sort of tread the line between the human world and a more exciting one, and I think penguins are perfect for that because they look so human in many ways, what with standing upright on two legs and looking a bit like little men in suits.

What are the challenges of writing a non speaking main character?

It can be challenging working out how Einstein is going to tell the Stewarts something, given that he can’t talk, but in a way I think that’s where most of the story comes from. If Einstein could explain everything then there would be much less of a detective mystery for Imogen to solve and they’d probably work everything out a lot sooner, which would be less fun. So whilst it does require coming up with different methods of communication, the fact Einstein can’t talk is also where a lot of the humour and tension comes from – so I actually think it would be more difficult if he could talk.

Will there be more from Einstein and the Stewarts?

Yes! The second Einstein book, The Case of the Fishy Detective, is out in October, and you can actually read a first chapter sample in the back of the paperback of book one, which came out in June. There will also be a third Einstein book in 2023.

What did you enjoy reading as a child?

When I was a toddler I apparently always carried around my copy of Avocado Baby and forced people to read it to me constantly. Winnie-the-Pooh was also very popular in my house, and then when I was a bit older I absolutely loved the Mr Gum books and the How To Train Your Dragon books. I’d say my favourite children’s book of all the time is When Hitler Stole Pink Rabbit: I still always keep a copy on my desk and flick through it when I need to remember what good children’s writing sounds like. I’m a big Alice in Wonderland fan too.

Tell us about your publishing journey.

As I mentioned before, I started writing children’s books whilst studying English at university. I had always written a lot and wanted to be a writer, but my love of children’s writing really started in first year when I wrote a series of children’s poems for my college’s poetry society. (I think originally because I couldn’t sleep and had a weird rhyming couplet about a pirate going around in my head.) I then compiled all of these into a much longer book, typed ‘who is Andy Stanton’s agent’ into Google, sent her the first three chapters and hoped for the best. I then had an agent but nothing especially publishable, so started to work on Einstein during my third year and over the first lockdown. I found out HarperCollins was going to publish me when I was halfway through an internship in Iceland.

Do you have other ideas for more books?

Yes, lots! I’m always working on about five or six books in my head and in my notebooks, though most of them get neglected for months at a time as I’m so busy writing Einstein.

Einstein the Penguin by Iona Rangeley is published by HarperCollins and is available to buy from your favourite bookseller.

Nura and the Immortal Palace: Why I Wrote It and Why It Matters