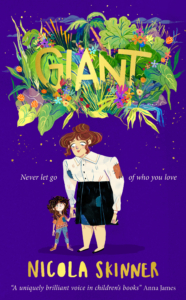 Nicola, we have always been a fan of your one-word titles!  Always eye-catching and intriguing, was this always part of your writing plan? What impact did you want this to have on readers?

Thank you! It was never, originally, part of the plan – the title for Bloom came about by accident via a series of emails with my editor, and in fact when I wrote it originally it had a longer title. But once Bloom was published the one-word title seemed to stick, and by STARBOARD it had become very much part of the brand. I must admit I love the title GIANT; it’s exactly the sort of title that would have made me pick up a book as a child. Just the word itself is exciting.

Sorrel, Frankie, Kirsten and Minnie are all phenomenal characters with large personalities and voices- tell us what inspired each character?

I don’t see them at all as having large personalities, so it’s interesting they come across that way. I see them completely differently – I see them as being children who are not able to be themselves. Perhaps my job, as a writer, is to liberate them. I think that’s ultimately my inspiration.

Did you find their voice is strong and urging you to tell their story when you were writing them?

Not always, no. I’m not a character led author, particularly, and my stories can be very vague and blurry when they first appear. My characters can take painfully long periods of time to evolve.

Your stories are always exciting, yet thought-provoking in their over-arching messages.  Do you find it easy to weave these into the narrative?

Thank you, that’s a lovely piece of feedback to hear. The answer is no; I don’t find writing particularly easy. I just cross my fingers and hope for the best. I rewrite a lot, which is when the themes gradually get weaved in.

Where do your ideas tend to stem from?

They usually start from something very small – a ‘what if’ scenario. What if someone grew something from their head? What if someone saw their home turn into a museum? What if a ship had one more journey to make? GIANT came from a sign. An actual sign! I saw it by the side of a road, and it said GIANT SALE. And for a tiny split second my brain thought someone was selling giants. I tried to unpack it – what if someone was selling giants? What sort of world would that be like?

I start at the beginning, without too much premeditation, to try to write my way into the world. Then a ridiculous amount of false starts, rewrites, angst, etc. I’m quite dogged in my approach, I think.

Caffeine. I can work both late nights and early mornings. But mostly, what fuels it is the idea itself – a compulsion to see it through, to see where the story itself wants to go. I’m very instinctual.

“There was beauty everywhere, even though her world was small”- I loved this phrase in Giant.  Do you think we should look for beauty around us more often?

Thank you. Although, do you know what, I tried to make that sentence deliberately sinister, or ominous. Minnie’s world in Quake Quarter – her tiny, gated enclave – is beautiful, but very much at the expense of other people’s happiness. And although she is surrounded by beauty, she is trapped within it. Recently I think what really matters is gratitude. We should look for things to be grateful for.

What do you hope readers will take from Giant?

I hope that children who read it will try to reclaim their power. Perhaps they will question the people in charge. I hope they just like it, too.

Are you writing anything new at the moment?

Giant by Nicola Skinner is published in hard back by Harper Collins and available from 23.06.2022