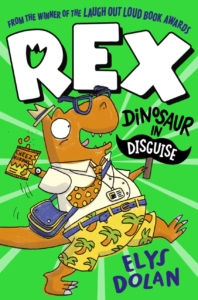 Rex: Dinosaur in Disguise is about standing out, fitting in, finding your place in the world and of course a band of supposedly extinct animals! What inspired this story and how do you hope it will inspire the children who read it?

When I began writing Rex I didn’t really set out to say anything about the themes of standing out, fitting in and finding your place. What I started with was a scenario I wanted to explore. I’ve always loved the idea that there’s creatures that used to walk the earth that have disappeared, like dinosaurs and dodos. I’m equally fascinated by creatures that are rumoured to still be around, but their existence cannot be proven like Bigfoot or Nessie. It’s so mysterious! So, what I wanted to explore in Rex is what would it be like if the unusual creatures that I find fascinating were living next door to me, but still trying to remain hidden?

It’s by mixing the outlandish with the mundane, unusual creatures with a normal human life, that caused the themes of standing out, fitting in, finding your place to emerge naturally almost without me knowing. This mix also created the incongruitous combination that makes the book funny, so I find it really interesting that this is also how the more poignant aspects emerged too. Sometimes there’s a perception that if something is funny then it doesn’t have anything important to say but, to paraphrase Gilbert K. Chesterton, funny isn’t the opposite of serious. Sometimes looking at something through the same unusual slant that makes it funny it can also reveal something new about it. When a familiar viewpoint is presented to us differently it allows us to question it in a way that we wouldn’t when its familiar form has become part of the furniture. I hope that this is one of the things that Rex does around the struggle to fit in and how hard it can be to be accepted. Seeing how a dinosaur might struggle can allow us to think about our own experiences of these themes in a new way or understand the people around us differently.

The other plus side of these important themes emerging with a bit of humour attached is that it can make them easier to absorb and ponder. The last thing I want is to be preaching and didactic to my readers. They can smell it a mile off if there’s another person trying to teach them a lesson. I like to think the primary purpose of my work is to be entertaining and that’s something I hope the reader can buy into, who doesn’t want a bit of a laugh? And if it then also has something important to say I hope it’s more likely to be considered and reflected upon if I’m not shoving it down anyone’s throat.

So firstly, I hope the readers really enjoy Rex and have a good old laugh. There’s nothing wrong with a book purely providing fun. But if at the same time it helps them look at their world in a slightly different way then I’d be delighted by that too.

Rex: Dinosaur in Disguise by Elys Dolan is published by Walker Books and is available now.

The link above will provide you with some activity sheets to accompany Rex:Dinosaur in Disguise