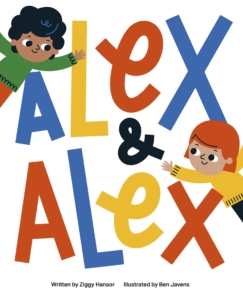 Similarity, Difference and Everything In-Between

Alex and Alex is a book about friendship and tolerance aimed at pre-schoolers, ages 2+. The premise is really simple – Alex and Alex are friends who like lots of different things. They have a bit of a falling out with one another and have some alone time, but they always make up because Alex really really really likes Alex. The twist is that the genders of the two characters are never specified, and they both enjoy a mixture of traditional ‘boy’ and ‘girl’ activities.

I wanted to write a book that addresses gender issues at the tender age at which children actually become aware of the social expectations around gender. I was watching a video of my now-14-year-old daughter when she was two, dressed in a pink tutu, holding forth about how she was going to be a princess when she grows up, and it got me thinking. I have never encouraged that kind of binary identity, and yet somehow it had taken root– I guess from nursery or from television or from the general zeitgeist that kids are so attuned to. I wanted to offer parents a springboard for conversation with their children about gender issues. I certainly don’t have a problem with girls wanting to be princesses or boys wanting to be footballers, but I think it’s important that children question where those impulses come from and ultimately whether or not they are significant in the way they interact with one another.

One of the things that I love about making children’s books, is that you are forced to boil down subjects to their very essence, and then decide how to present them in a way that feels playful and honest without preachiness or patronisation. Alex and Alex is about as stripped down as you can get.

Because the text is so simple, I wanted a spare illustration style to match it, so I worked with Ben Javens, who’s got a cheeky style with a limited colour palette and clean compositions. I wanted the expressions of the two characters to be very easy to interpret; happy, bored, frustrated, cross, sorry. I sent Ben a load of emojis and said can you draw the faces like this? Luckily, he understood what I was saying.

As an aside, I’ve just got back from Bologna book fair, where I was presenting all our recent titles to foreign language publishers from around the world. In my enthusiasm, I had somehow forgotten that adjectives and verbs are gendered in most languages, so the book really only works in English. It got me thinking how grumpy people can be about changing pronouns, when in most languages you’d have to change multiple words in every sentence.

Kids have such incredibly flexible minds. The world is not fixed and static, as it is for adults, so they have a much more tolerant approach to how things are defined and how those definitions can sometimes change. I think it’s important to embrace and encourage that tolerance in children’s literature, and to use humour to challenge everything around us. Always.

Alex and Alex by Ziggy Hanaor and Ben Javens is published by Cicada Books.

The Belonging of Books by Laura Mucha
Scroll to top