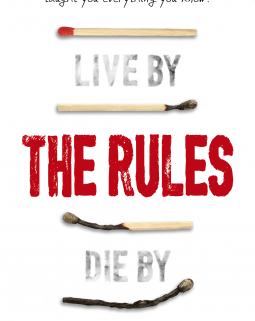 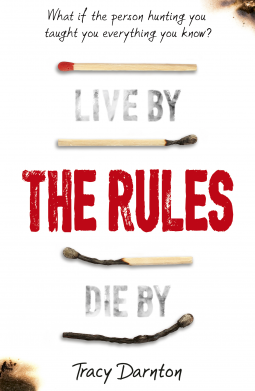 The Rules has just been published by Stripes. It’s a YA thriller about Amber who’s on the run from her dad, a prepper. Her whole childhood has been spent preparing for disaster and having to live by her dad’s rules which he scrawls on the walls.

When I was writing The Rules in 2019, I never contemplated that we’d be in the middle of a pandemic when the book was due to be published. Prepping was not a well-known term but, as Brexit arguments raged and people feared shortages, I had conversations with friends who were stocking up on loo roll, canned food and prescription drugs, or had dug a vegetable patch to grow their own. The government was buying fridges to store drugs and developing an expensive SHTF (s*** hits the fan) strategy. We also had a major power outage, climate disasters like Hurricane Dorian in the Bahamas and a renewed focus on climate change with the Extinction Rebellion protests. Foraging was fashionable and when I was refreshing my memory on some of the survival techniques in the book, it was crossing my mind that I should make sure my family knew how to do some of this.

For the book, I looked at prepper websites and blogs, watched YouTube videos of bushcraft, browsed equipment websites and looked at photos of prepper bunkers. Bit by bit I was building a picture of Amber’s dad – down to the type of jacket he wears. I also drew on the political crisis in the UK when thinking about how a man like him could develop a following and particularly how words could be used to manipulate people when he delivers his talks. I wanted to explore the toll of constantly planning for disaster, and the attraction of creating rules to such a flawed man to bring some order to the chaos within him.

Just as I delivered the book, there was a sense of surprise, or unease, on Twitter that local authorities were releasing information as part of Preparedness Month (who knew??) about the recommended contents of a Grab-and- Go Bag, which Amber has in the book. I reassessed my own preparedness for a SHTF scenario. We built up a small stash of stockpiled essentials and we already had a load of hiking and camping kit. I read the books my kids recommended on rebuilding the world after an apocalypse (!). I drew up an emergency plan of contact numbers and bug out options – that is, places known to all members of the family where we could rendezvous if we got separated. But it was part of research really, we were playing at it – I didn’t think we’d ever have to use any of it.

But then the s*** really did hit the fan. Pandemic – one of the potential disasters that Amber reels off in her prepper show and tell at junior school. And the fights over toilet roll that the characters Amber and Josh joke about actually happened. And the stockpiling. And the lack of essentials. And being confined to a house for an extended period. Priorities shifted. Key skills were recognised.

My kids laughed nervously when I scrawled rules on the kitchen noticeboard – as Amber’s dad had done – even if my rules were about handwashing. Everyone took on new rules and huge changes to the way we live our lives. My Brexit stockpile came in handy but most of the eventualities preppers plan for didn’t materialise, thank goodness, although when we initially locked down, I feared that they might.  We’ve kept vital services like electricity, water, communications and the banking system. I haven’t been able to buy anything like antibacterial hand gel for weeks and weeks but I’m well-stocked with food. I haven’t had to put my foraging skills to the test. The biggest blessing is the maintenance of law and order. Given the seismic shift in everyone’s way of life, that’s a mighty relief.

Going forward, even when this current pandemic is finally controlled with a vaccine, I suspect being more prepared for the next one will be part of everyone’s routine. Turns out there’s nothing good about hitting the zeitgeist. Real life has become stranger than fiction.

Tracy Darnton’s The Rules is published by Stripes. Tracy’s last book The Truth About Lies was shortlisted for the Waterstones Children’s Book Prize and was a World Book Night title. She lives in Bath and is longing to visit bookshops again.You can follow Tracy on Twitter @TracyDarnton or Instagram tracydarnton

Any views and opinions expressed may not truly reflect those of the FCBG.

A Numbers of Numbers
Scroll to top