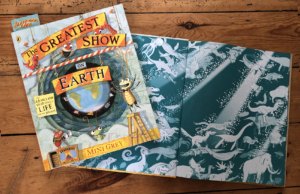 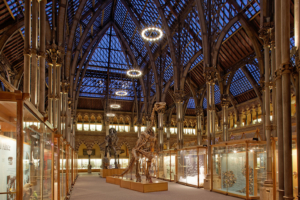 About ten years ago I was spending an awful lot of time in the Oxford Museum of Natural History with my then 5 year old son Herbie. It was our favourite place to hang out. The Oxford Museum was built before that other famous one in London – in fact, it inspired the London one. It’s a beautiful building: cast iron columns stretch out wrought iron leaves to a patterned glass roof, carved stones plants writhe over the plinths. It’s a cathedral to Life. Well, there we were one day, admiring the iguanodon, and I realised that my prehistoric knowledge was shockingly sketchy; I wasn’t entirely sure how long ago it was that the dinosaurs had gone extinct, or even how old the Earth actually was.

Back at home, Herbie and I got out paper, scissors and glue and made ourselves a 4½ billion year timeline and also put all our favourite prehistoric creatures on it. And it looked excitingly mind-boggling.

One rather nice thing about making picture books, is that some of the time, I’ve worked out exactly how to tell my story, and I just need to build the pictures. And in that time, the listening part of my brain has all the attention space to listen to things while my visual brain is at work making pictures. So ten years ago I got completely obsessed with listening to every broadcast, lecture or documentary I could find over the internet about the ancient Earth and prehistoric life.

Earth’s story is a story of changing climate, volcanic outpourings, the slow but constant shifting continents, changing levels of carbon dioxide and oxygen, and the influence of life on that atmospheric balance.

I wanted to present the whole story of life on Earth to my readers, but I wanted to make a book you could read like a story – that you could read at story time. I secretly wanted grown-ups to be my audience too.

And who could tell this story? Who better than a cockroach. And a troupe of insects. On a dump. In a shoebox theatre. 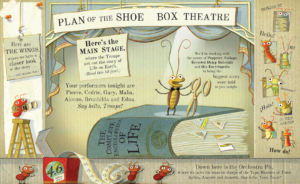 Diagram of the Shoebox Theatre

Sometimes, with non-fiction books, there’s a lot to digest on a page. I wanted my reader to see at a glanceTHE MAIN STORY, to know where to look first. But then to be able to delve deeper in, if they wanted to.  So I took the model of the theatre stage – where your main stage is your first focus, and then you can explorethe wings and also see what’s going on down at the Tape Measure of Time.

Detail of the Tape Measure of time

And we’re dealing with enormous numbers here, we’re counting in millions of years. But small children can handle these things, and I love being able to treat my readers like scientists. But my own timeline still gives me vertigo. One centimetre on the Tape Measure of Time represents one million years. At that scale, the whole wild ride – 4.6 billion years – would stretch down most of my street. The story of visible animal life – the last 600 million years – can be unfolded in a large room. The story of modern humans – homo sapiens – is contained in the very last centimetre. In fact, we evolved maybe 300 thousand years ago, which is the last 3 millimetres. And to find all our human story of farming and the comfortable Holocene climate of the last 10 thousand years, you need to take the last dizzying tenth of the last millimetre – about a hair.

Oxford Museum of Natural History is a cathedral to Life – and Life is a cathedral: in us are all the cataclysms that forged us and the animals we’ve come from – our inner fish. And all the life-forms around us are our fellow travellers on this journey.

The Greatest Show on Earth by Mini Grey is published by Penguin Random House and is available now.

Reluctant to Rhapsodic Readers by Myles McLeod
Scroll to top