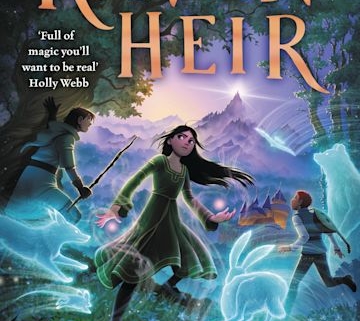 Author Stephanie Burgis has written an incredible guest post for the FCBG about finding inspiration from The War of the Roses.

The Raven Heir by Stephanie Burgis

Whenever I find myself lost for new fictional ideas, the best thing I can ever do is immerse myself in history. I’m a fantasy writer, so many of my novels are set in magical worlds that I’ve created myself—but real-world history teaches us, whenever we take the time to look back at it, how people have acted in different extreme situations, and those behavioral truths hold steady no matter where any story is set.

…And it doesn’t get much more extreme than the history of the Wars of the Roses. I’d always had a vague outline of them in my head; I knew about Richard III, of course. I’d seen that Shakespeare play, and I’d visited the quirky little museum about him in York’s city walls back when I still lived in Yorkshire. I wasn’t particularly interested in the history of the wars themselves, though, until I moved to Wales twelve years ago.

I was here, sitting in my home in Abergavenny, when I first picked up Leanda de Lisle’s Tudor: A Family Story, and read about the future Henry VII, as a teenager, standing on the battlements of Raglan Castle – a castle that just happens to be my own favourite local castle, one that I’ve taken my kids to visit countless times. Henry Tudor was held prisoner there while he grew up, because his very existence was a threat to the current king, as an alternate heir to the throne. His mother wasn’t even allowed to see him for years and years, despite all of her desperate attempts to be reunited with her beloved son.

In that particular scene in the (nonfiction) book, the young Henry was standing on the ramparts of Raglan Castle to watch a battle take place outside its walls – a battle between his guardian/gaoler’s soldiers and those of his own family, who were trying to re-take him.

When I read that scene, it struck a deep chord inside me. I couldn’t help imagining Henry’s emotions as he stood there, looking out at that particular battle. I thought about his mother, who used all of her wits and every power at her disposal to try to get back to her son from the first moment he was taken away from her. I thought about the desperation I would feel in her place, as a mother myself of sons I adore (and for all the criticisms that various historians have made about Henry’s mother over the centuries, none have expressed any doubts about the true love she felt for her son).

And I noticed, as I went on to devour more and more nonfiction books about the Wars of the Roses, just how often those competing heirs to the throne were actually children at the time – MG-aged children, in fact, woken in the middle of the night to throw on disguises and ride frantically across the country in the dark to escape imprisonment or death, because of the families they’d been born into.

The Wars of the Roses formed a ruthless, bloody, and deeply depressing trauma to the entire country, as powerful families spilled blood again and again in their fight over the throne – but as I read, I found myself completely fascinated by the question of just how it would feel to be one of those disputed heirs as a child, officially “the rightful king!” but unofficially a helpless pawn in constant danger.

If I was the mother of one of those pawns, I would have done anything to rescue my child from danger and keep them by my side – and of course, in a fantasy world, a mother might well have more options than Henry VII’s mother did in our own real-world history.

In The Raven Heir, my heroine, Cordelia, has a mother who is a powerful sorceress. When she realizes she’s pregnant with a possible heir to the throne, she retreats to an enchanted forest and casts spells of protection to keep the brutal wars from invading her territory. So Cordelia and her triplets grew up with no idea that the kingdom is breaking itself outside – or that one of them is officially the rightful heir to the throne.

Of course, the story of the book actually starts when her mother’s spells fail and Cordelia and her triplets are swept into the perilous outer world after all…

But it all began with that one history book, and with the image that set its hooks around my heart and set the storytelling part of my brain to work, spinning out all the alternate ways that history could have played out in a world full of magic, shapeshifting, and ancient spirits.