The Ship of Doom is a promising beginning to an exciting series for young readers.  It prompts the question about those small moments that have great impact.  Read on for an insightful piece from author, M.A. Bennett, about this series. 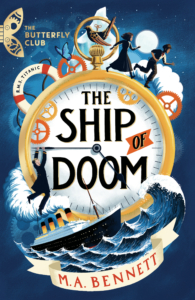 My new book for readers ages 10+ is called The Ship of Doom and it’s part of a series called The Butterfly Club. It’s the story of three Victorian children – Luna, Konstantin and Aidan – who are time thieves. On behalf of a shadowy organisation called the Butterfly Club, who meet once a week at the Greenwich Observatory, the trio travel forward in time to steal artefacts from the future, in order to accelerate progress. In The Ship of Doom they travel to 1912 to steal a Marconi radio from the communications room of a great ship. But when the ship turns out to be the RMS Titanic, things go wrong very quickly…

I’ve always been drawn to the story of the Titanic, as my Granny was born on the day it sank. She wasn’t exactly of the vintage where people did that thing of saving the newspaper from the day you were born, but I do remember growing up seeing the front page of The Times from that fateful day in a frame, and it made quite horrific reading.

This story was inspired by the concept of those ‘Sliding Doors’ moments, moments in time when things go one way but they could so easily have gone another. One of those moments that I kept coming back to was the fate of Guglielmo Marconi, the inventor of the wireless radio. The legend is that he missed the Titanic because his kid was sick, and he travelled to New York on the Lusitania four days later. Of course, his child’s illness saved his life. But what made his story even more interesting was that one of his first wireless radios had been installed in the Titanic’s communications room. At the inquest into the ship’s sinking, Marconi’s invention was credited with saving the life of every single survivor. So you have two things going on – Marconi missing the boat, and Marconi’s radio saving all the survivors by calling a rescue ship to their aid.

With The Butterfly Club series the USP is that my time travellers use the Butterfly Effect. That’s the theory that states that if you change one tiny thing, you can change time, and the children are guided by a hologram of its inventor, Professor Edward Norton Lorenz, who speaks to them with the benefit of hindsight from 1969. Once I had that concept I knew there were almost endless possibilities for moments in history that hinged on one tiny element; in this case, the Marconi radio. What keeps the arc going, however, is the characters. I hope I’ve been able to establish three interesting but quite distinct characters, and it’s the interactions and growing relationships between them that will hopefully keep readers coming back for more.

Next the time thieves travel to Egypt in 1922 for The Mummy’s Curse. The children find themselves in the Valley of the Kings, where they attempt to find the tomb of the mythical king Tutankhamun and secure his sarcophagus and treasure for the Butterfly Club. I swear this wasn’t planned, but Mummy’s Curse will be coming out almost 100 years to the day since Tutankhamun’s tomb was opened!