FCBG Asks is a regular feature on our blog, where we send well known authors and illustrators questions about their work and future plans!  This month, we are thrilled to feature Laura Ellen Anderson, author and illustrator of several brilliant series. 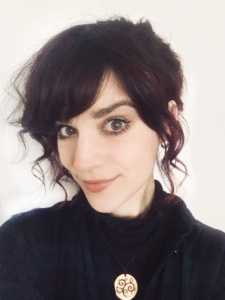 You create such vivid and memorable characters in all of your books.  Where does the inspiration come from?

I take inspiration from all the things I enjoy in life such as the Autumn season, Halloween, magic and all things CUTE!

I’m VERY inspired by film, in particular, animated films – especially those by Pixar, Disney, Laika and Cartoon Saloon. When I’m writing a story, I often try to imagine my characters speaking to one another – picturing the whole scene playing out in front of me as if it were a moving picture. Watching animated films and any film in general gives me a great sense of how an effective story arch works, what characters are the most appealing and how characters might interact with eachother. It’s such a wonderful process, developing your own character, from the very first sketch on the page, to being able to tell their whole story and see them grow throughout your book.

As an author-illustrator, do you find it easier to draw the character before you begin writing about them and developing them?

My ideas often develop from an initial sketch. This was the case for both Amelia Fang and Rainbow Grey. I’ve always loved slightly spooky characters, and ANYTHING to do with Halloween! I’m a big fan of the creator Tim Burton and any of his films such as ‘The Nightmare Before Christmas’, and ‘The Corpse Bride’. But I was also very inspired by Sibeal Pounder’s ‘Witch Wars’ books after illustrating them. I wanted to write something funny and a little bit gothic. So, one day, whilst eating a peanut butter sandwich in a café, Amelia Fang was born in the form of a sketch! I then decided to draw a cute pumpkin, and thought, why not make him Amelia’s pet! I think we all secretly want a pet pumpkin 😉

Just over ten years ago I drew a rainbow haired girl skating through the air next to a cloud-cat. I came up with the loose concept for a group of magical characters who had the ability to create and control the weather. As I reached the end of the Ameila Fang series, Ray Grey sparked to life in my head and suddenly her whole world unfolded. Again, all from one initial illustration!

What tips would you offer budding author-illustrators?

Keep reading! Or watching films that you love to inspire you! There’s no right or wrong way to become an author-illustrator. I would encourage you to write what YOU love, because then that love and passion will show through the text, and the reader will sense that and hopefully enjoy your story just as much as you enjoyed writing it. Sometimes you’ll have days when you’re feeling less creative – but that’s okay. I recommend keeping a little notebook nearby, or even in your bag with a pen so that when inspiration strikes (which can happen at the most unexpected time!) you’ll be ready to jot it down. Sometimes it might be one word, or a small picture… and sometimes you might write down an idea and forget about it for years – then come back much later to it to find a whole story falls out of your brain!

Can you describe your work environment for us?

It probably always smells of coffee. I like things to be tidy, so it’s rarely messy on my desk (although right now as I write this, the table has sketchbooks, pens, and bookplates scattered over it…) I like to work standing up in the kitchen or in my studio room at the special standing desk. Otherwise, I prefer to write and plot stories in cafes. There’s something soothing about the gentle chitter chatter and clinking of mugs in the background, and it’s nice to have a change of scenery; get out of the house.

One thing I will say – if you come up with an idea just before going to sleep (WRITE IT DOWN) You always THINK you’ll remember it in the morning, but let me tell you – you probably won’t.

Is there anything in particular which fuels your work?  Do you work better to deadlines? Does chocolate feature in your work day at all?

I definitely work much better to deadlines and rely on To Do lists to keep up with all the niggly tasks I have to do alongside my book projects. Chocolate features HEAVILY in my day, along with a LOT of coffee. I recently bought a retro Cadbury’s chocolate 2p machine to reward myself on good writing days… I really must refill it actually.

How do you map out your stories- is it physically with lots of paper or digitally or do you use a mixture of both?

When mapping out my stories, I often create a rough breakdown of all the main story events, to make sure they’re in some kind of order. For Rainbow Grey Book 1, I created what can only be described as an endless scroll of paper, listing everything I wanted to happen in each chapter. This really helps me to manage the plot in my head. It is also VERY good for remembering the really important points I might otherwise forget.

Are you working on anything now that you can share?  A new character or another book in a series?

I am currently working on the last book in the Rainbow Grey trilogy. I can’t reveal too much about it right now, but Ray is BACK and she means business! Nim is as cute and explosive as usual, and there’s definitely a lot of new discoveries. 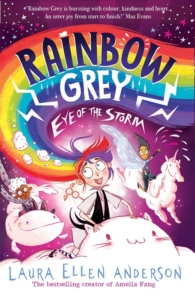 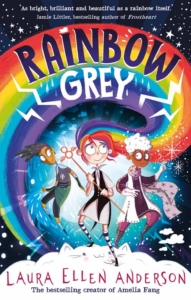 A Robot Squashed My Teacher by Pooja Puri

The Ship of Doom by M.A. Bennett
Scroll to top