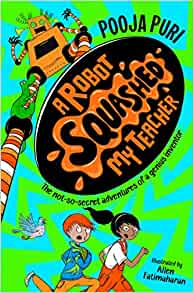 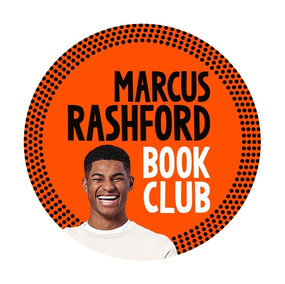 Marcus Rashford began a book club to encourage and nurture a love of reading in children, and this launched in June 2021 with its first title, A Dinosaur Ate My Sister by Pooja Puri, illustrated by Allen Fatimaharan.  The second book from this team, A Robot Squashed my Teacher, has been added to the book club suggestions.

We were lucky enough to be offered an interview with Pooja Puri about this series!

Please tell us a little about the series and your second title, A Robot Squashed My Teacher?

The first book in the series, A Dinosaur Ate My Sister, tells the story of Esha Verma, a genius inventor extraordinaire who is determined to win the Young Inventor of the Year competition and the brilliant Brain Trophy. Together with her apprentice, Broccoli, she invents a time machine in her bedroom. Unfortunately, her plans are thwarted when her boring big sister Nishi accidentally gets stuck in the Age of the Dinosaurs, resulting in a bonkers prehistoric rescue mission! In A Robot Squashed My Teacher, Esha and Broccoli are once again trying to win the Brain Trophy. This time, they’ve come up with an even more brilliant invention – the RoarEasy, a device intended to let humans and animals talk to each other. Unfortunately, things get complicated when the RoarEasy malfunctions, transforming their teacher into a pigeon…

Who or what inspired your main characters?

I think the characters for this series appeared in a rare and wonderful ‘brain-spark’. I had been brainstorming different ideas for a time travel story when a question popped into my head: what if you accidentally sent someone through time? This was followed by another question: what if that someone just happened to be your boring big sister? That was the moment these characters popped into my head – Esha with all her inventing brilliance, her weather-obsessed big sister, Nishi, and, of course, Broccoli – who appeared with Archibald, an adrenaline-loving tortoise.

How was it writing the second book?

Writing the second book was a lot of fun and hard work! One of my favourite parts about writing A Robot Squashed My Teacher was turning Monsieur Crépeau, Esha’s teacher, into a pigeon. In this book, Esha is also faced with an arch-nemesis, Ernie Rathbone, an equally brilliant inventor. Ernie was enormous fun to write – and I particularly enjoyed working on his inventions which thwart Esha’s plans at every turn.

Your first book in the series, A Dinosaur Ate My Sister, was selected for the first ever Marcus Rashford Bookclub, what was that like?

It has been incredible. Growing up, I was lucky enough to experience the wonder of books – an experience which I believe should be available to every child. Seeing A Dinosaur Ate My Sister go out into schools across the country and hearing the reactions from readers has been absolutely phenomenal, and I’m really excited to see what the Bookclub does next.

In the series, you combine inventions with adventure, was this an important combination for you?

Definitely! I’ve always believed that the idea of inventing is super exciting. Just think how inventions have changed the entire world! Esha’s belief in the power of inventing is a really important element of this series and I hope readers come away feeling ever so slightly inspired to invent something of their own (without turning their teacher into a pigeon, of course…).

The illustrations are by this year’s official World Book Day illustrator, Allen Fatimaharan. What was it like working with him and seeing your characters come to life?

I’ve really enjoyed working with Allen on the series. He understood how I wanted the characters to appear and seeing the roughs come through for the first time was amazing.

Do you have more adventures planned in the series?

I’m currently working on the third book in the series, but I can’t say too much more about it except that it involves even more bonkers inventions and wacky adventures. Watch this space!

A Robot Squashed My Teacher by Pooja Puri, illustrated by Allen Fatimaharan is out in paperback 14 April 2022 (£6.99, Macmillan Children’s Books)

Older Reader Category Round Up