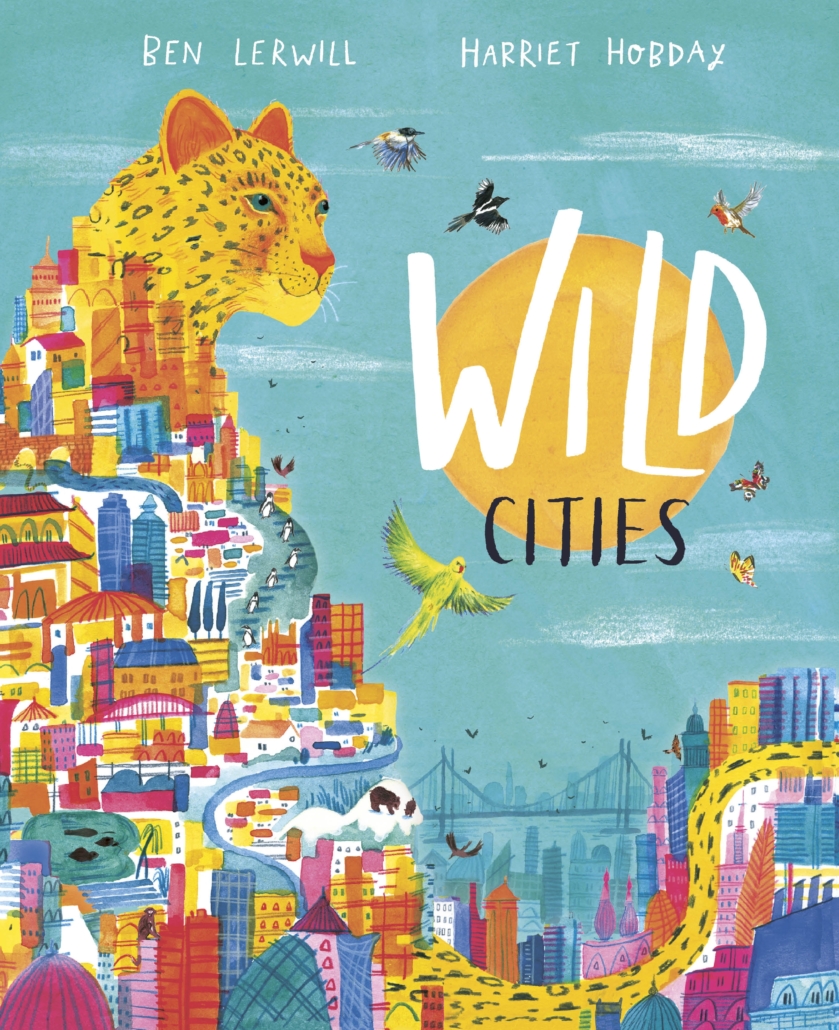 When an opportunity comes along to chat with an author or illustrator about their work, we always say yes and their answers to our questions are amazing everytime. Ben Lerwill and Harriet Hobday have created an enticing book aptly named Wild Cities. Opening the book will take readers around the world, visiting the wildlife that live in our famous cityscapes.

That exact reason! It’s easy to think of cities as purely human environments, so it felt really important to show that they’d also become habitats for all sorts of fascinating animals. In many cases these species have been given little choice but to adapt to city life, so they’ve had to come up with ingenious ways of surviving. I also wanted to demonstrate that urban wildlife was something not to fear, or to ignore, but to celebrate.

Beyond thrilled. Harriet has done an incredible job of bringing these cities and animals to life, and the cover is a gorgeous rainbow jumble of beasts and buildings. A leopard is a great example of an animal that forces us to think differently about city wildlife, so it was an inspired choice to have one dominating the illustration.

Great question! I’ve worked as a travel writer for more than 15 years, which means I’ve been lucky enough to explore most of these cities first-hand. But (with apologies for pointing out the same thing as thousands before me) Paris never fails to work its spell.

Many years ago I spent time living in China, and I’m confident that I once caught a night-time glimpse of one of Beijing’s fabled hutong weasels. I point out in the book that they’re so elusive that some locals don’t even believe they exist – but they’re out there!

There was a small amount of interaction in terms of advice and ideas, but really it was Harriet – along with my excellent editor Emily Lunn – who drove all the illustration decisions. The use of colours is brilliantly clever. If you look closely at each city, you’ll see Harriet has chosen certain tones as themes for each place. In New York, for example, the Central Park trees on one spread mirror the apartment bricks on the next.

Geographical variety played a big role. I wanted to include a spread of cities that covered as much of the world map as possible. But the wildlife itself was just as key – it was about spotlighting cities with the liveliest range of interesting and surprising stories to tell.

One of the messages I try to get across in the book is how important it is that we not only notice the wildlife we encounter in our cities – bees, boars, butterflies and all – but also that we understand it, and place value on it. Ultimately, the more we choose to learn about the resourceful birds and beasts that live in our manmade environments, the better it becomes for all of us.

Launching Moon Dog virtually into the world
Scroll to top