On this International Women’s Day, it seemed apt to be given the opportunity to feature a book about women in history who fought to lead, explore and learn.  Women Who Led the Way features explorers, adventurers and hopeful women wanting more!  Read on for a brilliant piece from Mick and Brita! 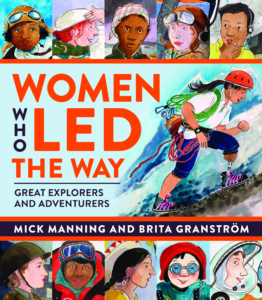 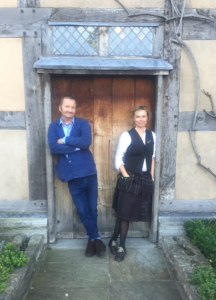 Mick and I spend the summers near my childhood home in Sweden and that is where the idea for
this book began – with an old photo album inherited by my mother. We had been sorting through
the photographs taken by my great-great aunt Hedvig who had emigrated to America in 1885 and
only returned to Sweden in 1913. She had bought her own camera and among her amazing
photos we found a small image dating to about 1914 of two women, one in overalls, on a huge
motorbike. After some research we realised this was actually Hedvig’s friend Ester Blenda
Nordström. She was a legendary journalist and adventurer who, at the age of twenty-three, went
under cover for a leading Swedish newspaper to expose the harsh working conditions of
household servants in Sweden.
This inspired both Mick and I, and after a discussion with our long-term publisher Janetta Otter
Barry we found out that, by coincidence, she’d had a request from primary teachers for a book
that featured and gave credit to female explorers… We began to research further and to discover
and select other female explorers from history. We set ourselves the limitation of explorers as
there were so many strong women through history to write about that we felt we had to make
some parameters. However not all the explorers in our book read maps and travel the world. We
found examples of amazing women who explored other sorts of worlds: the macro-cosmic
universe as seen through the lens of a microscope for example, or the macro-cosmic 18th century
career of Caroline Herschel discovering comets and stars though home-made telescopes –
despite having only partial sight in one eye. I chose the Viking-age leader Aud the Deep-Minded
to begin our book and Mick particularly enjoyed the story of Lee Miller, the brave photo-journalist
who mocked the defeated Nazi’s by taking a portrait of herself in Hitler’s bathtub with her muddy
army boots on his bathmat! But I think the last example in our book, Arunima Sinha moved us
most. This is the uplifting story of a volleyball champion who was selected for the Indian police
force, only to be attacked by thieves as she travelled by train for her interview. In the struggle
(because she fought back!) Arunima was thrown off the train and was injured so badly her leg had to
be amputated. But she didn’t give up and went on to climb Mount Everest and become a great
motivational speaker! 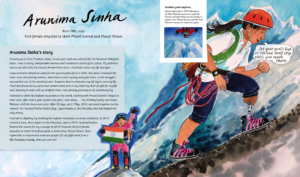 We have a bright-as-a-button Anglo-American niece called Mae who lives in New York and is so
obsessed with space that she wants to be a space explorer herself when she grows up (she is
only 4 years-old now). So of course Mae Jemison, the US astronaut is her hero and this made
researching her career a pleasure for us both – and to be fair (and as a bonus for our niece) we
have also included the amazing story of Valentina Tereshkova, the first woman in space.
We are very proud of this book that not only looks at this important subject with diversity and
humanity but also sets a positive ‘girls can do anything’ example to children everywhere. In my
introduction to the book I quote Mae Jemison who once said. ‘It’s your life. Go on and do all you
can with it’ We have been inspired by all the women we have found and included in our book and
we feel sure children will be too. 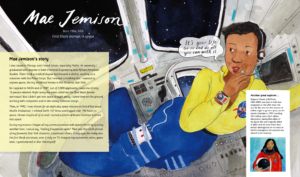 Mick and Brita have pioneered Picture Book Non-Fiction since 1995. They have won the
Smarties Silver Award, five English Association Awards and have been shortlisted twice
for the Astrid Lindgren Prize. In 2020 they were jointly awarded the SLA/Hachette award
for Outstanding Contribution to Information Books.

Women Who Led The Way by Mick Manning and BritaGranstrom published by Otter-Barry Books £12.99 on 8th March 2022International Women’s Day.

The Balloon Thief by Aneesa Marufu