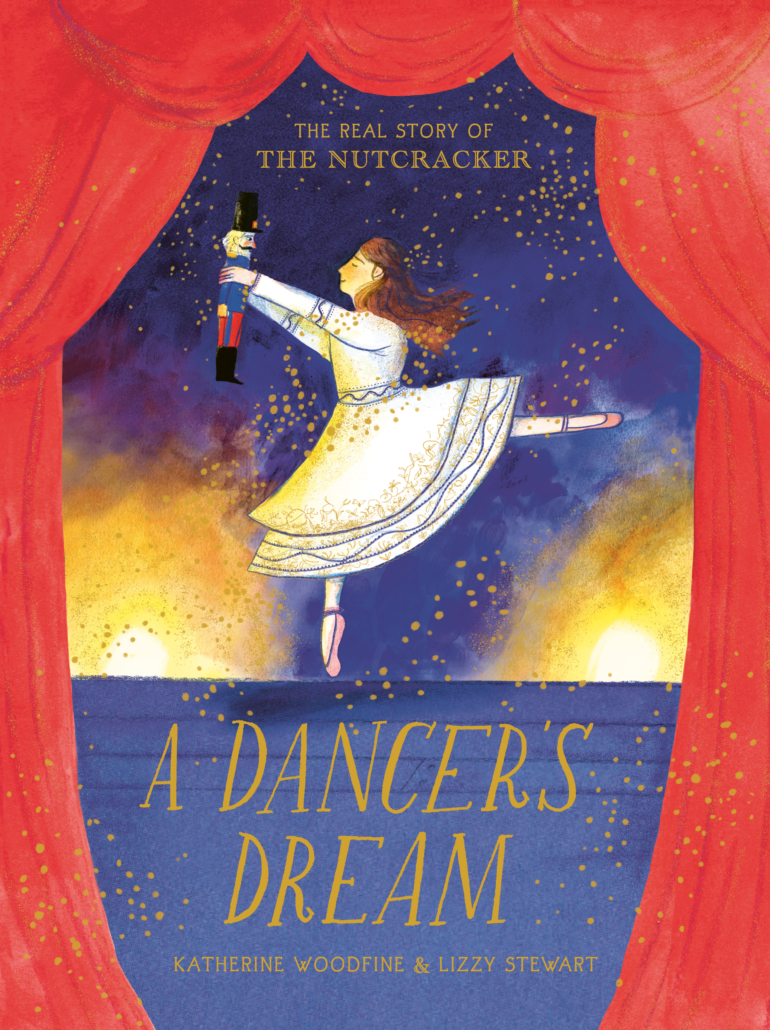 Written by Katherine Woodfine, Illustrated by Lizzy Stewart, Published by Simon and Schuster

As a child, one of my favourite Christmas traditions was a trip to the theatre or the ballet. Seeing a production of The Nutcracker at Christmastime was a special treat — the story of Clara and the Nutcracker doll which comes to life on Christmas Eve was full of wonderful festive magic.

When I was first asked by Abi Elphinstone to write a short story for an anthology on the theme of Winter Magic, these memories of seeing The Nutcracker were one of the first ideas that came to mind. I knew I wanted to write a historical story, so I set about delving into the history of the ballet — and in particular, it’s very first performance.

I soon learned that The Nutcracker was first performed in December 1892, at the grand Mariinsky Theatre in St Petersburg. The ballet was a collaboration between the composer Tchaikovsky and choreographer Marius Petipa, who had previously worked together with great success on the ballet The Sleeping Beauty.

It was Petipa who chose the story, deciding that they should base their new ballet on an old tale ‘The Nutcracker and the Mouse King’ by ETA Hoffman, which had later been adapted by Alexandre Dumas Pere. But Tchaikovsky was uncertain. He wasn’t convinced that the choice of story would work. Nevertheless he began trying, unsuccessfully, to write the music. Then, while away travelling, he received the terrible news that his beloved sister Sasha had died. Tchaikovsky was heartbroken. The production was postponed for a year, and he was still grieving for his sister when he returned to writing the music.

It was not a happy time for Petipa either. As work on the postponed production finally began, he suffered his own terrible family tragedy, when his 15-year-old daughter died of cancer. Shortly afterwards, Petipa fell seriously ill himself, and was forced to withdraw from the production altogether, handing over to his assistant Lev Ivanov.

In spite of all these troubles, The Nutcracker finally premiered at the Mariinsky in December 1892, as part of a double-bill with an opera, Iolanta. But the ballet was not very well-received by the audience, or by the critics. One newspaper even called it ‘the most tedious thing ever seen’. In fact, it wouldn’t be until several decades later that The Nutcracker was to become the much-loved Christmas favourite it is today.

One of the things about the production that was most criticised — but which immediately interested me — was the controversial decision to cast children in The Nutcracker’s main parts. The roles of Clara, Fritz and the Nutcracker Prince were all played by pupils from Russia’s Imperial Ballet School. For pupils to perform in ballet production was not new — but it was very unusual to see children take such important and central roles.

Amongst those chosen was 12-year-old Stanislava Belinskaya, who played the role of Clara. As I read, I grew especially interested in Stanislava. She was the first person ever to take on this famous role, and yet we know little about her. After this moment in the spotlight, she seems to fade away from dance history. Interestingly, I also learned that one of Stanislava’s classmates and friends, who was not chosen to dance in The Nutcracker, went on to become one of the most famous ballerinas of all time — the legendary Anna Pavlova.

I decided to make Stanislava — or Stana, to use the shortened form of her name — the main character in my own Nutcracker story. I imagined more about her life — her love of dance and music, how she might have felt to be chosen to play Clara, and how her classmates — including her friend, Anna — might have reacted. I tried to imagine what it might have been like to step into the spotlight and dance on stage in the grand Mariinsky Theatre for an audience including the Tsar himself. But I also decided that my story would pick up on some of the sadness behind the scenes of this first production of The Nutcracker — and so I invented a family for Stana, including a beloved sister Olga, who is ill, and who Stana would do anything to help.

My Nutcracker story was first published in Winter Magic under the title Casse-Noisette, but I’m thrilled that it has now been transformed into a beautiful illustrated book, A Dancer’s Dream. Lizzy Stewart’s glorious artwork brings Stana and her world — snowy St Petersburg and the opulent Mariinsky Theatre— vividly to life. Although many of us won’t be able to enjoy the tradition of seeing The Nutcracker in theatres this year, I hope that A Dancer’s Dream will give young readers the chance to experience a little bit of the magic of seeing the ballet — as well as discovering some of the intriguing and surprising real-life origins of this Christmas favourite.

The 12 Days of Christmas or Grandma is Overly Generous by Alex T. Smith
Scroll to top