Jenny McLachlan’s Land of Roar series brought fun, imagination and magic to readers everywhere.  Her new book will bring a new sense of mystery and magic.  She explains where the initial idea sprang from in her blog below! 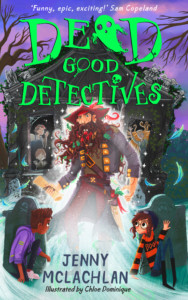 When I visit schools I hatch a dragon out of an egg. SPOILER ALERT! It’s a puppet. Even though my hand is clearly making the dragon sniff the air and wriggle, at least one child will ask, ‘Is it real?’

And this, for me, sums up the magic of reading. It’s a magnificent trick: words on a page, scribbles, can make stories appear in your mind . . . sometimes. Because for some young readers, stories remain frustratingly hidden away and offer little pleasure and a lot of frustration.

Both when I was an English teacher and now, as a writer, it’s these children I’m particularly keen to reach. I spent hours as a child floating on clouds over Moomin Valley or trapped in caves with the Famous Five. Reading filled my childhood with adventure and joy I want to pass this experience on to as many children as possible.

When I wrote the Land of Roar series, I wanted readers to step (actually, they have to crawl then fall) into Roar then taste the salt on the air and feel the heat rising through the scales of a dragon’s fat belly. The Land of Roar books were brilliant  fun to write, but after three years of rampaging with Arthur and Rose through a playground of islands, mountains and waterfalls, I was ready for my next adventure: Dead Good Detectives.

The idea for Dead Good Detectives came to me when I was camping with my family. We met a mum and her son who told us about an amazing place they had visited that day: a pirate graveyard that was filled with ancient headstones, each one marked with a skull and crossbones.

On the journey home I let my mind wander. I imagined a seaside town, Fathom, and decided that a quiet, map-obsessed girl, Sid, would live there. She’d hang out in a graveyard and one day accidentally set a three-hundred-year-old pirate ghost, Bones, free from a spooky mausoleum. I decided that she wouldn’t want to have anything to do with him because, well, he was ghost, and smelly and dripping with seawater and always accompanied by a rude parrot. But I thought that would  all change once Bones asked her to help him find his lost treasure.

Then – because I have a big imagination and it was a really long car journey– I turned the mausoleum into a pub – the Halfway House – and filled it with more ghosts: an Elvis impersonator, a highwayman, a land girl, a teenage witch and her goat, Radulfus. I decided all these ghosts would desperately need Sid’s help.

Later, I discovered that the ‘pirate graveyard’ the mum and her son visited wasn’t actually full of pirates, but by then it was too late. The magic had begun: like Bones stepping out of his ghostly prison, surrounded by a sparkling cloud of mist, Dead Good Detectives had sprung into life. There was no stopping it now. . .

I hope lots of children enjoy visiting Fathom and peering with Sid through the dusty windows of the Halfway House. I hope they thrill to the sound of Bones’s clomping footsteps and laugh when he follows Sid to school and joins in with assembly. I hope they feel a tug of worry when Bones and his parrot start to fade away, button by button, feather by feather, and a rush of excitement when Sid digs for treasure in the milky light of the moon. I hope Dead Good Detectives makes the magic happen for them.

Dead Good Detectives is written by Jenny McLachlan and is published by FarShore.  It is available from your favourite bookseller.

For Newcomers and For Welcomers by Katherine Applegate
Scroll to top