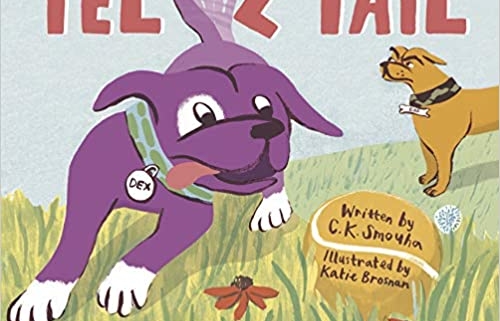 The story of Tell Tail came about after spending a bit of time with my neighbour’s exuberant Staffordshire bull terrier, Stanley. I’ve always loved dogs and Stanley is a dog after my own heart – he really is the maddest, most carefree beast I’ve ever encountered. I was thinking how some dogs are bred for fighting and how that nature-nurture issue comes into play – if you train that joy out of a dog, the energy and expression has to find some other way out.

From there I got to thinking about kids. There’s a lot of conversation at the moment around the importance of letting boys express themselves – but I think the conversation extends to children generally. Sometimes I hear people talking about ‘resilience’ and I think that often means emotional containment. Keeping a stiff upper lip in the face of things that are actually quite upsetting. I was also thinking of a specific instance of a person who is close to me, who has a little boy who is a sensitive little soul. His dad finds that really hard to handle, and there is an ongoing journey in which the dad is exploring his own vulnerabilities to accept his son’s.

These were my starting points when I began the writing process. I also really like the phrase ‘the tail that wags the dog’ and I tried to find a way of expressing that. I first thought that Dex’s tail should have a personality of its own. That the book should sort of be a conversation between Dex and his disobedient tail, but I had to abandon that idea, as it took away from the journey of Dex and his Dad, which was really the thing that interested me.

It’s always hard telling a story in short blocks of text over 32 pages – especially a story that covers both plot-based and emotional narratives. It was so lucky that I had Katie Brosnan alongside as an illustrator. She has a wonderful way with movement and expression. I found that some of the text explaining how Dex was feeling could just be stripped away, as it was so evident in the illustrations.

My writing is often issue-based – but I really like working within a metaphorical world. For me, allegory makes it easier to keep things light and funny – which is always preferable to earnest and preachy! Tell Tail is a story that’s close to my heart, and I hope it rings true for readers as well.

Tell Tail is published by Cicada, and available to purchase from all good booksellers.

The Inspirations for The Castle of Tangled Magic