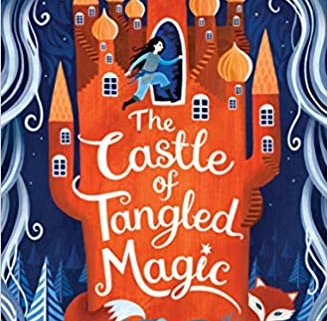 I often find it is the interaction of several separate inspirations that can spark the idea for a story. The Castle of Tangled Magic was born out of three main inspirations: my fascination with Russia’s centuries-old wooden buildings, spirits from Slavic mythology, and a fairy-tale in verse written by Alexander Pushkin.

The buildings that I found so inspiring were mostly churches, rather than castles. There are thousands of wooden churches in Russia, some of them many hundreds of years old. They are beautiful buildings, understated and elegant, and created using incredible carpentry skills. One church in particular that fired my imagination was The Church of Transfiguration on Kizhi Island in Russia’s Lake Onega. It rises from a beautiful grassy meadow and its twenty-two dome-shaped roof cupolas, tiled with hand-carved aspen shingles, overlook the lapping waters of the lake, shining brilliant silver in the daytime and dazzling gold at sunset. To me, The Church of Transfiguration looks like a fairy tale castle filled with magic.

Slavic spirits have fascinated me all my life. My grandmother would leave salt offerings out for her domovoi – the benevolent house spirit who protected her home and occasionally helped with the chores. My grandmother also firmly instructed me to wear my jumper inside out when we walked in the woods, to protect from leshy – the woodland spirits who like to lead people astray. In adulthood, I’ve spent many happy hours researching these, and other Slavic spirits, and adore the history and folklore associated with them. It seemed a natural progression to populate my magical castle and the landscape around it with reimagined versions of these spirits that retained traditional elements but also incorporated a few new ideas.

One of the most imaginative, playful and folklore-filled books I’ve read is Ruslan and Ludmila by Alexander Pushkin. It’s a fantastic fairy-tale adventure, brimming with magic, courage and love. I’ve always adored it, and as I was thinking of writing a story set in a magical castle, characters from Ruslan and Ludmila kept pushing their way into my mind. I re-read the book (several translations of it in fact) and became rather obsessed with it. I felt driven to write a kind of imagined sequel to Ruslan and Ludmila, where I could explore some of the characters in more depth, and play with some of the themes in an imaginative way. I wanted to write something with the same epic-quest feel as Ruslan and Ludmila, but that was exciting and relevant to an audience that included the children of today.

All of these inspirations interacted together to create The Castle of Tangled Magic. It’s a book that I’ve wanted to write for a long time – one with a magical doorway and a land populated with fantastic Slavic fairy-tale creatures. I loved exploring the themes of bravery, belief in magic, belief in self, and remedying the mistakes of our ancestors. But most of all, I enjoyed creating a world filled with ancient magic, for the readers of today to adventure into.

The Castle of Tangled Magic is published by Usborne, and available to purchase from all good booksellers.

The 12 Days of Christmas or Grandma is Overly Generous by Alex T. Smith